Blues not blindsided by Barrett’s Japan move for 2021 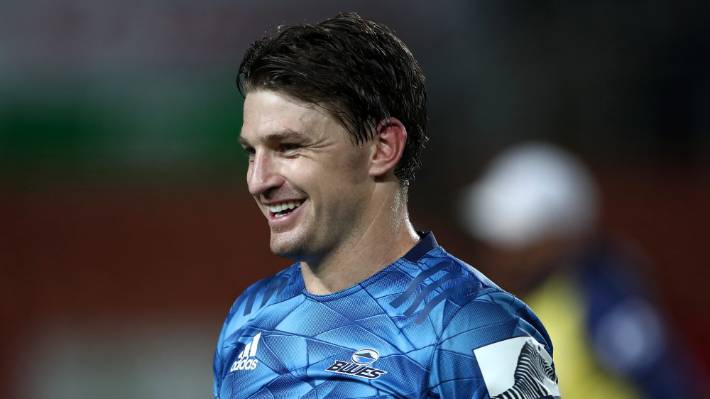 Beauden Barrett says he's 'loving every minute' of his first year with the Blues in Super Rugby Aotearoa. FIONA GOODALL/GETTY-IMAGES

Far from reeling over confirmation of Beauden Barrett’s big-money Japan sabbatical for 2021, the Blues believe they have the depth, quality and resilience to take their star signing’s temporary absence in their stride.

Forewarned was forearmed for the Auckland-based Super Rugby franchise in terms of Barrett’s plans. His four-year deal with New Zealand Rugby, signed late last year when he confirmed his move north from the Hurricanes, had a well-signposted one-season sabbatical written in. There had been absolute transparency between the player and his new team around his intentions to exercise it in 2021.

The Blues confirmed they were far from blindsided on this.

Despite initial UK reports suggesting Barrett was headed to the Suntory Sungoliath club in Japan on a two-year, $3 million mega-deal, reality soon set in on Friday morning with confirmation that the All Blacks playmaker had merely exercised the sabbatical clause in his contract to play next season in Japan. He will even return in time to be available for whatever national commitments he is required for in 2021.

Blues coach Leon MacDonald told Stuff in an interview on Friday that planning for Barrett’s absence next year had been so advanced it had even factored into their selections for the revamped Super Rugby Aotearoa competition, where they have made a flying 3-0 start heading into this weekend’s bye.

“It was [no surprise],” MacDonald told Stuff. “We knew last year this clause and this option were there and we expected it to happen. We’ve been planning for 2021 without him, hence having a lot of young 10s there and having guys like Dan Carter around to help build our depth.

“We’ve invested in Harry Plummer, Stephen Perofeta and Otere Black. We feel comfortable we’ve got our bases covered pretty well. It also played a part in our selection around keeping Otes at 10 and Beaudy coming in at fullback, knowing the big picture as well.

“[Beauden] has been fantastic this year, the way he’s turned up and added to our group and the way he’s playing. He’s earned it really from being an outstanding All Black for such a long period of time.

“We get him when he comes back for a couple more years and we get him back for the World Cup, so it’s win-win really.”

This is the crux of the matter. The Blues do suffer some temporary pain, but they are well aware that without clauses such as Barrett’s extended post-World Cup break and the opportunity to take a one-season sabbatical (reported to be worth as much as $1.5m for the player), he would not have re-upped in New Zealand for the four-year term he has.

MacDonald believes deals such as this, along with those that have allowed Sam Whitelock and Brodie Retallick to experience stints in Japan, are a necessity in the modern landscape.

“We can’t compete financially in New Zealand but we can give them other options,” MacDonald told Stuff. “Sometimes time is what they want, and that was a part of Beaudy’s re-signing, and sometimes it’s trying to set themselves up financially. By and large most players love playing in New Zealand, they love Super Rugby and love playing for the All Blacks. To be able to do both is ideal for them.

“Richie McCaw retired in New Zealand. He got what he wanted, and guys like Sam Whitelock and others will end up finishing up in New Zealand. It’s a great compromise and shows how flexible we are in our thinking outside the square to keep our key players.

“The older players are really important to the younger guys and to lose them is a big loss to our rugby. It’s a critical part of keeping New Zealand rugby strong.”

MacDonald was less forthcoming on the potential for keeping veteran former All Black Dan Carter at the franchise beyond the 2021 campaign he had signed on for. The 38-year-old, 112-test five-eighth has yet to reveal his playing intentions beyond Super Rugby Aotearoa and might offer some valuable insurance for the Blues in Barrett’s absence.

But MacDonald said the subject had not been broached between he and his former national and franchise team-mate.

“This was a really unique opportunity being a short competition in between working out what his next steps are. It fitted time wise,” said the Blues coach.

“What he does next, I don’t know. We haven’t even spoken about that. The purpose for him this year was in adding value around that 10 space, knowing what we knew. It’s been critical.”

Barrett, meanwhile, said next season had presented as the ideal time to take up an offer from the Milton Haig-coached, Tokyo-based Sungoliath.

“It made sense to go next year and then have two years back with the Blues and hopefully the All Blacks in the leadup to the Rugby World Cup (in France in 2023),” he said.

“My wife and I are excited. Japan is an appealing place for a young family and comparatively safe in health terms.”

The 83-test fullback/five-eighth said he was thriving on the Super Rugby Aotearoa experience thus far. “It’s been brutal and demanding which is what you expect. I’m loving every minute of it and having such big crowds turning out has been fantastic.”

The All Blacks star added that the move to the Blues had been everything he had hoped for. “We still have a job to do this season. It is an excellent environment with great coaching and an awesome bunch of dedicated players.

“While the excitement about heading to Japan will build closer to the time, I’ll also be looking forward to being back later in 2021.”