Blues brush past Hurricanes to snap their losing streak 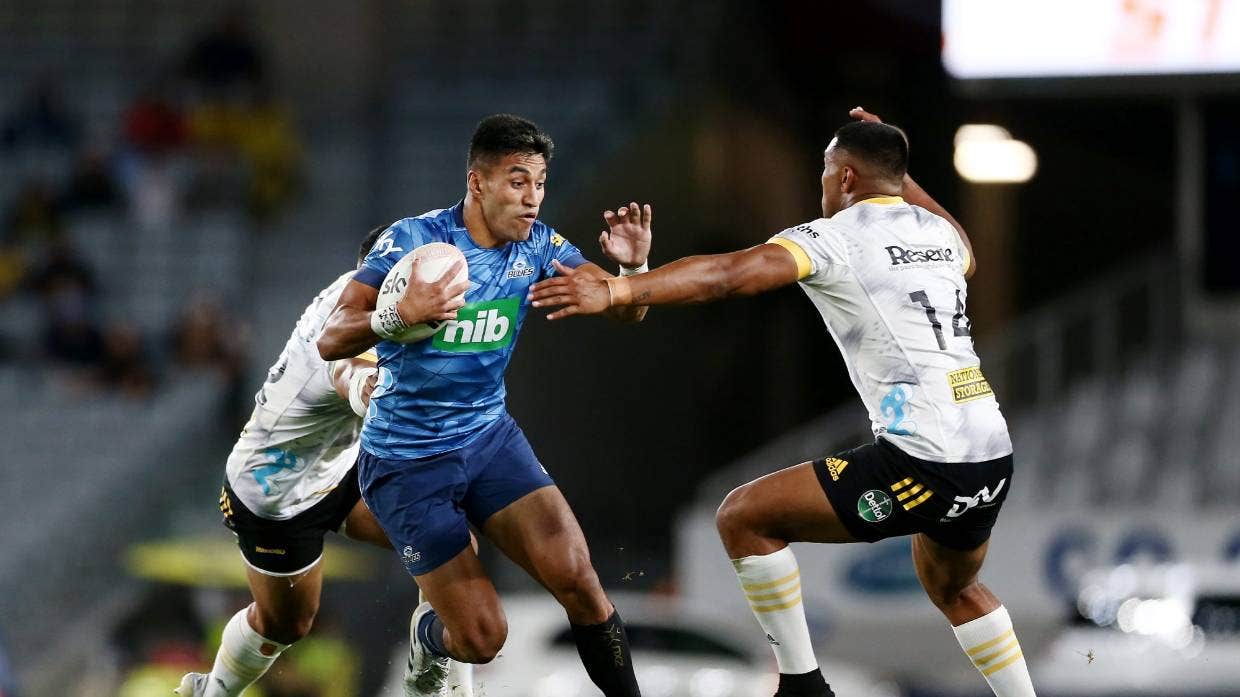 The Blues are well and truly back in the championship race after a strong second half saw them snap their two-game losing skid and bank the winning points against the Hurricanes on Saturday night at Eden Park.

On a Super Rugby Aotearoa Easter weekend when the runaway leaders made a surprise stumble, Leon MacDonald’s men made a decisive thrust to move within four points of the Crusaders at the top of the standings with an important 27-17 victory over the Hurricanes.

They will have to play better than this down the track, but never mind. After back-to-back defeats, it wasn’t so much about style points as it was the competition points on offer at Eden Park on a warm Saturday evening.

And with crucial second-half tries to TJ Faiane and Mark Telea, the Blues banked their third victory of the season to improve to 14 points, and within sight of those Red and Blacks after their surprise Friday night home defeat to the Highlanders.

The Blues had to work mighty hard, but got their act together somewhat in the second 40 to open out on the Hurricanes and then close things out well over the run home. Their only disappointment would have been the late try to visiting loose forward Reed Prinsep that denied them the bonus point.

Still, this was better from MacDonald’s side. The forwards had been challenged to be better, and for the most part they were, well led by stand-in skipper Tom Robinson and with 101-game prop Ofa Tuungafasi back on starting duty the scrum was much, much better.

The home lineout missed the mark twice in the first half, but bounced back well over the run home. In form No 7 Dalton Papalii continued his strong form with some fine work over the ball early on and a team-leading 15 tackles without a miss.

Among the home backs, Rieko Ioane had another poised performance, Stephen Perofeta was elusive at the back and the team was undoubtedly the better for the excellent Faiane back in the No 12 jersey.

The Canes brought plenty to the occasion, but just couldn’t sustain their challenge after halftime. Salesi Rayasi carried well in the first half, Julian Savea made one blockbusting run in the second spell and, up front, Ardie Savea and Dane Coles led the forwards with their usual vigour.

If the Blues coaches were looking for an emphatic response in the wake of last week’s Hamilton misfire, they certainly didn’t get it in the first 40 when the home side rather stumbled its way to a fortuitous 10-9 halftime lead.

The Blues did score the half’s only try a half-hour in when they finally got a lineout right (after two costly whiffs earlier), had the maul rocketing towards the right corner and picked up a penalty try when Ardie Savea was adjudged – somewhat harshly – to have brought the drive down.

Just for good measure the Canes skipper was sent for 10 minutes in the bin, following on from his fellow loose forward Du’Plessis Kirifi who had gone there round the 16-minute mark for a borderline high cleanout on Otere Black that also looked to be on the harsh side.

It was a mark of the Blues’ inefficiency through the opening stanza that the two periods in which they held a numerical advantage yielded plus-3 advantages to the Canes on both occasions.

That was the story of the opening half for the Blues. They were a man up for 20 of the 40 minutes, yet managed just 40 per cent possession and 35 territory and were forced to make more than double the tackles of their opponents.

Three first-half penalties to Barrett kept their score ticking over for the visitors as they stayed well in the contest despite those big calls going against them.

A booming 52-metre penalty from Barrett gave the Canes the early second-half lead, but it didn’t last long as talismanic Faiane put his team back in front (17-12) on the 50-minute mark courtesy of Perofeta’s nice step and go to expose James Blackwell’s decision to come out of the defensive line.

On the back of that score the Blues, finally, seemed to settle. As the subs rolled in they struck again a quarter of an hour from the finish when Rieko Ioane’s beautiful break and wide pass put Telea in for the third try, and a 24-12 lead.

From there it was the Blues’ match to lose. Prinsep’s try gave the visitors a sniff, but this time the Auks were able to close a lead out, with Black’s late penalty denying the Canes even a bonus point.

The Blues head into bye week feeling a lot better than they did seven days ago.