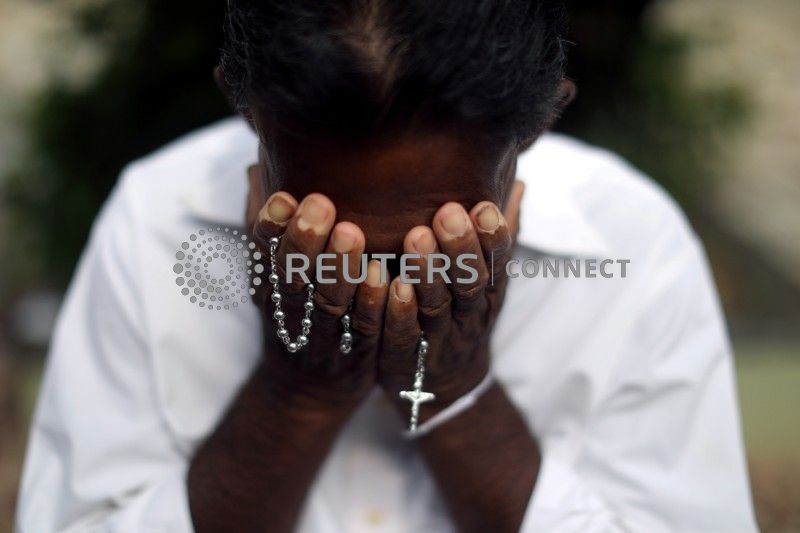 A person mourns at a grave of a victim, two days after a string of suicide bomb attacks on churches and luxury hotels across the island on Easter Sunday, at Sellakanda Catholic cemetery in Negombo, Sri Lanka April 23, 2019. REUTERS/Athit Perawongmetha

COLOMBO (Reuters) – Sri Lankan housewife Fathima Fazla thought of her neighbours in the grand three-storey home across the street as the wealthy celebrities of her humble Colombo suburb. She had no idea how infamous they would become.

Two brothers who lived at the white house on Mahawela Gardens have emerged as key players in suicide attacks on Easter Sunday that killed more than 350 people and stunned an island state that had enjoyed a decade of relative peace.

Inshaf Ibrahim, a 33-year-old copper factory owner, detonated his explosive device at the busy breakfast buffet of the luxury Shangri-La hotel, a source close to the family said.

When police went later that day to raid the family home, his younger brother Ilham Ibrahim detonated a bomb that killed him, his wife and the couple’s three children, the source told Reuters, requesting anonymity for fear of reprisals.

“They seemed like good people,” Fazla told Reuters from her rundown home opposite the Ibrahim family residence, now cordoned off with crime-scene tape and marshalled by police.

The brothers’ names were also reported in local media. Sri Lankan authorities have not released the identities of any of the bombers, and police did not respond to request for comment.

The brother’s father, Mohamed Ibrahim, was arrested as police investigate those behind the attacks, police said. Ibrahim, a wealthy spice trader and pillar of the business community, had six sons and three daughters. He was admired by many who knew him.

“He was famous in the area for helping the poor with food and money. It’s unthinkable his children could have done that,” Fazla said, glancing affectionately at her two young daughters. “Because of what they have done, all Muslims are treated as suspects.”

Ilham Ibrahim, 31, openly expressed extremist ideologies and had been involved in meetings of National Thowheed Jamath, a local Islamist group suspected of involvement in planning the attacks, according to the source close to the family.

His entrepreneur brother, Inshaf, was outwardly more moderate in his views, and was known to be generous with donations to his staff and struggling local households, the source said. Inshaf was married to a daughter of a wealthy jewellery manufacturer and he faced no problems with money.

“I was shocked. We never thought they were these kind of people,” said Sanjeewa Jayasinghe, a 38-year-old network cabling engineer who works next door to the Ibrahim family home.

The early Sunday bombings shattered the relative calm that has existed in Buddhist-majority Sri Lanka since a civil war against mostly Hindu, ethnic Tamil separatists ended 10 years ago, and raised fears of a return to sectarian violence.

Though the Ibrahim brothers will be reviled across much of the country for plunging Sri Lanka into disarray, they will be missed by some in the community who relied on them.

“He was kind, unlike like many bosses. I was happy working for him,” said Sarowar, a Bangladeshi worker at Inshaf’s abandoned copper factory on the outskirts of Colombo. “He is gone. What do I do now?”