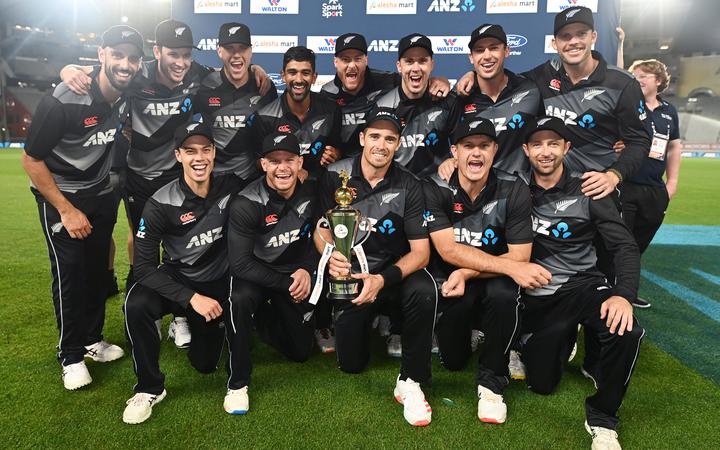 New Zealand opener Finn Allen smashed 71 off 29 deliveries to help the hosts thrash Bangladesh by 65 runs in the rain-shortened third Twenty20 international at Eden Park to complete a 3-0 sweep of the series.

Allen, who will turn 22 this month, hit 10 fours and three sixes in his knock to help New Zealand put on a total of 141-4 after wet weather forced the match at Auckland to be reduced to 10 overs per side.

The right-hander added 85 in under six overs for the opening stand with Martin Guptill, who also belted five sixes and a four in his 19-ball 44.

“Obviously nice to get a little bit of individual success at the same time. I’ll take a bit of confidence going forward from that.

“From the beginning I sort of felt I was in the zone. I was just focused on my partner and the bowler. I didn’t really hear too much going on in terms of background noise and then I sort of had a moment to appreciate the crowd, the guys that had hung around to watch us through the rain.”

Bangladesh, who had lost 3-0 in the preceding ODI series, suffered the ignominy of being bundled out for 76 in 9.3 overs, with New Zealand leg-spinner Todd Astle picking up 4-13 in his two overs.

Black Caps skipper Tim Southee dismissed opener Soumya Sarkar and Bangladesh captain Liton Das off successive deliveries in the first over and returned later to also pick up the wicket of Mosaddek Hossain to finish with 3-15.