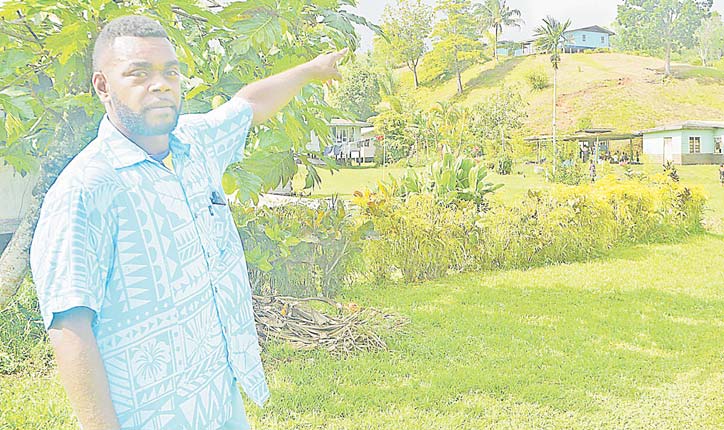 A Dawara villager points to the hilltop, behind the blue building, where QVS was first established in Yanawai, Cakaudrove. Picture: SERAFINA SILAITOGA

This year Queen Victoria School celebrates the 70th anniversary of it being based at Matavatucou in Tailevu.

After many years of moving from one location to another, QVS finally arrived at its permanent home.

In addition, this momentous event was also significant in another very important sense.

QVS and its antecedents were originally intended to focus the education they provided to preparing the sons of iTaukei chiefs for their traditional leadership roles and responsibilities in the indigenous iTaukei community.

Hence, the name accorded to QVS was Vulinitu.

This article outlines the historical development of QVS both in its location and in achieving its objectives in the education of the iTaukei for national leadership roles and responsibilities.

Antecedent of QVS — A Preparatory School for young chiefs

In 1879, the Bose Levu Vakaturaga or Great Council of Chiefs considered and approved a motion for the British colonial government to build an industrial school for iTaukei boys.

In particular, the school was to serve the special purpose of providing good education for the “gone sucu turaga” to help them in their future leadership roles.

This was the origin of how the title of Vulinitu was conferred on QVS.

This new wave of interest in the education of the “gone sucu turaga” was due in part to their appreciation of the sending for overseas education of two sons of chiefs – Ratu Penaia Kadavulevu of Bau and Ratu Josefa Lalabalavu of Somosomo, Taveuni.

They were sent to Sydney just after 1874 by the Chief Secretary, John B. Thurston.

A site was identified at Yanawai, overlooking Dawara Village in the district of Wailevu along the Yanawai River, which is the boundary that separates Cakaudrove province from Bua province.

All the necessary buildings, thatched bure, were built.

As with any new venture, teething problems were encountered.

In the 13 years of its existence, the school had to weather many difficulties.

The main ones being administration, shortage of staff, lack of teaching equipment and isolation from Suva.

In 1894, the government decided to close the school at Yanawai and build a new one closer to Suva.

A site at Naikorokoro was chosen, between what is today Monfort Boys’ Town and Togalevu Some changes were implemented at Naikorokoro and soon things looked up for both staff and students.

As a consequence of the improvement, commerce and leadership were added to the curriculum.

However, in 1900, the Government decided to build a quarantine station at Naikorokoro.

The BLV/GCC requested the British colonial government to establish a school modelled along the lines of English public schools for the higher education of indigenous Fijian youths.

And it was to be named Queen Victoria School, or QVS.

The Government Gazette of November 17, 1905, announced that enrolled students should be 9 or 10-years old.

The course would be for five years and instructions would be given in English.

In July 1906, the first headmaster, Mr. John V. Thompson, arrived to help in the planning and construction of the school, which was erected at Nasinu, five miles from Suva, on land which is the current site of the Valelevu campus of the Fiji National University.

As World War II progressed across the Pacific, the threat of a possible invasion of the country by the Japan armed forces became real and
imminent.

As a consequence, Allied Forces, especially New Zealand and the United States, quickly moved in and set up their bases in strategic locations.

Therefore on August 10, 1942, the school buildings at Nasinu were taken over by the United States Armed Forces and converted to a General
Hospital.

What followed is best described by the words of the Headmaster, D. G. Tomblings, who made the following entry in the Staff Notice Book: “Evacuation of school took place on August 10th 1942, when it was handed over to 18th General Hospital, USA Forces. Form 4 to Sawani for the rest of the year. Form 3 to Lodoni, Forms 1 and 2 sent home,” the book noted.

QVS was reopened at Nanukuloa, Ra, in January 1943 for Forms 1 to 4, with the Headmaster Mr Tomblings, Freddy Ieli, Apisai Nabou, Esala D. Kama, Netani T. Druavesi, with Joeli K. Ravai transferred to the office of the Adviser of the Native Affairs Department.

When school commenced in 1943, thatched bure were ready to be dormitories for the three houses – Bau, Rewa and Verata.

Classrooms for forms 1 to 4, a science laboratory and the dining hall, all thatched bure, were ready for occupation.

For some time, the school encountered difficulties with an inconvenient and unsuitable site.

Anxiety was raised in the press and even in the Legislative Council.

Criticisms were made on the lack of a proper water supply and inadequate sanitary accommodation.

In October 1948 a medical team inspected the school site and reported: “It’s obvious that the present premises are not sufficient to cater properly for the education of 165 boys; the fact that 8 cases of active tuberculosis have occurred during a period of 9 months indicates that living conditions are unsatisfactory,” the inspection report said.

The best charcoal was obtained by using mangrove (dogo).

The duty of collecting freshly cut dogo was usually left to a group of boys.

The school uniform was all white – shirts, sulu and a belt.

There was strong rivalry during inter-house sports.

Soccer was played in Term 1, rugby in Term 2 and cricket in Term 3.

The 1944 head boy, Poasa Tuinakelo of Vugalei, related his story to Ratu Semi Seruvakula: “When the school broke up for the holidays in December 1944, the Headmaster, Mr. D.G. Tomblings told the Head Boy to accompany him to Lodoni, Tailevu. After getting off at Lodoni, they walked down to the beach.

“In those days, the beach, which is a leisurely walk from the current entrance of RKS, was a place where passengers caught the daily
Levuka/Lodoni/Levuka ferry. They were to board a government boat that was coming from Suva. Tuinakelo was completely in the dark as to who was in the boat and where they would be going.”

Once in the boat, they were introduced to Ratu J.L.V. Sukuna and Sir Henry Scott.

The party then sailed along the coast and finally laid anchor at Nukuvuto.

Once ashore, they went up to where the main school buildings are at present.

They continued going up the slopey bush land till they reached the current site of the school chapel.

Tuinakelo was completely unaware of what was unfolding in front of him as the headmaster and the two important visitors from Suva were in deep discussion on the vantage point.

Finally, the headmaster turned to the head boy and said, “Tuinakelo, this is the site where QVS will have its permanent home.”

The 205-acre freehold land was donated by Sir Henry Scott, KC, legal advisor to the Fijian Affairs Board, to the Great Council of Chiefs following negotiations initiated by the renowned Fijian leader and statesman Ratu J.L.V. Sukuna.

The school would, in the first instance, have a roll of 180 students made up of three houses (Bau, Rewa, Verata) comprising 60 students each.

A house would have two dormitories with thirty beds in each.

In later years, more buildings would be added to house a total of 360 students.

The site was on the drier side of Viti Levu and in keeping with the practice of public schools in the UK such as Eton and Harrow, it would be built a fair distance from towns or cities.

• EMITAI L. BOLADUADUA is a former senior civil servant and retired diplomat. The historical views shared in this article are the author’s and not necessarily of this newspaper.