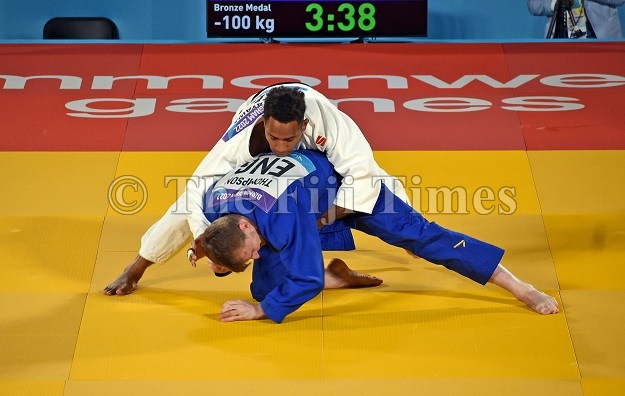 Team Fiji judoka Tevita Takayawa says it takes a brave man to play the sport after he missed out on a bronze medal at the 2022 Commonwealth Games in Birmingham, England, yesterday.

Competing in the -100kg, Takayawa took on crowd favourite and hometown boy Rhys Thompson from England.

Takayawa said this was one of his best events.

“Really disappointed with the loss but I’ll absorb that slowly. It was a great event and I’ll rate this within my top three.

“I’ve learnt a lot in this tournament as I haven’t competed in more than a year,” Takayawa said.

He adds after a couple of weeks break, his preparations for future events will resume.

“I haven’t had a cheat day for more than two months now. Haven’t eaten any burgers or cakes for a long time. It will take a few days to treat myself and then I will get back to training,” the soft-spoken judoka said.

Takayawa’s loss saw Fiji’s run come to an end in the sport at the 2022 Games.

Gerard Takayawa lost his first match to his opponent from Cyprus.