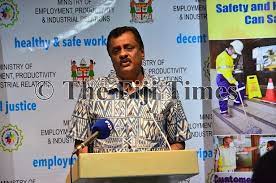 He made the comment in reference to Mr Kumar’s words to Hindu devotees at Lautoka’s Field 40 temple annual pooja ceremony last weekend.

The Employment Minister told devotees that in order to maintain the current level of political stability, they should take steps to ensure they could continue sitting in peace and harmony.

“This is similar to the Attorney-General’s statement in October 2018 when he said people putting a dagger to their necks if they didn’t vote for Voreqe Bainimarama,” the NFP leader said.

“Nobody in his or her right frame of mind would threaten people, of all places at a temple, about making the right political choice, which is supporting FijiFirst, if they wanted to continue such celebrations in future.

“That is why ’til now they have not condemned Agriculture Minister Mahendra Reddy for his remarks at Wairuku temple recently when he falsely claimed that Indo-Fijians were only provided equal rights after 2013 by Bainimarama.

“In Bala’s case, given his political tutelage and background, he perfectly understands why it is reprehensible to make political threats at a place of religious worship.”