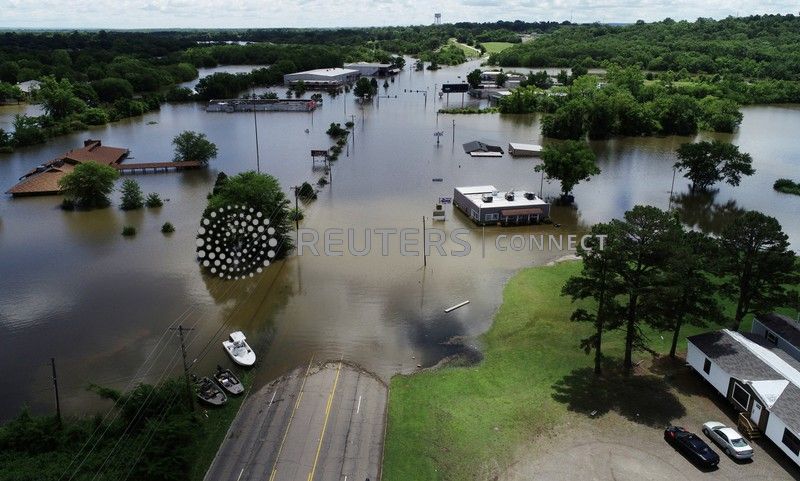 FILE PHOTO: A road submerged in the flood waters of the Arkansas River is shown in this aerial photo in Fort Smith, Arkansas, U.S., May 30, 2019. To match Special Report USA-FUNDS/INDEX-CLIMATECHANGE REUTERS/Drone Base

(Reuters) – The far-reaching impacts of climate change on companies have investors pressing corporate leaders for action to minimize environmental damage and to maximize disclosure of risks to their businesses. The threats range from more frequent floods or wildfires that imperil major assets to regulations that could undermine profits.

While votes on climate-related shareholder resolutions often take center stage at corporate annual meetings, they seldom draw support from the two top U.S. index fund firms, BlackRock Inc <BLK.N> and Vanguard Group. The reticence of the two largest index fund providers to back these proposals draws criticism from some investors and climate activists.

BlackRock sometimes criticizes the quality of the climate-change proposals offered by others, but the world’s largest money manager and its top rivals have not put forward any proposals of their own since at least 2001, according to research firm FactSet.

“The investors who should be the leaders have so far been the laggards,” said Rob Berridge, director of shareholder engagement at Ceres, a Boston-based research and advocacy group focused on sustainability issues.

Their limited support for other shareholders’ climate-related proposals highlights a broader pattern of deference to management at the companies in their stock portfolios, according to a Reuters analysis of their proxy voting records.

Ahead of shareholder meetings in 2017, investors led by Walden Asset Management filed resolutions with Blackrock and Vanguard calling for reviews of their proxy voting related to climate change. Walden later withdrew the resolutions after BlackRock and Vanguard each pledged to put a new focus on climate risks.

But in 2018, BlackRock and Vanguard only backed 10% and 12%, respectively, of climate-related shareholder resolutions, according to a count by Ceres. A Reuters review of proxy voting disclosures for the 2019 proxy season ended June 30 found similar rates of support by each manager for key votes tracked by Ceres this year.

Those rates were less than Walden and other investors expected given the companies’ pledges to take the issue more seriously, said Tim Smith, a director at the firm now known as Boston Trust Walden, a money manager focused on environmental and social issues.

The top index fund firms say they prefer to address issues they have with portfolio companies, including those related to climate change, in private talks with executives rather than through shareholder votes. Vanguard governance chief Glenn Booraem said such votes don’t tell the whole story of its advocacy on climate issues. In an August report, Vanguard said it had met often with companies in carbon-intensive industries over the past year and discussed issues such as environmental risks and their impact on shareholder value.

Vanguard and BlackRock both declined to discuss their votes on specific proxy measures. They note their own investors hold a wide range of opinions on climate change.

BlackRock told a large Seattle pension plan client in 2018 that it often finds shareholder proposals too prescriptive, immaterial or in the domain of a company’s leadership.

“We typically aim to understand the companies rather than use our vote as a blunt binary instrument,” BlackRock said in response to due diligence questions from the Seattle City Employees’ Retirement System (SCERS).

The third largest index fund manager, State Street Corp <STT.N>, supported the resolutions tracked by Ceres 34% of the time in 2018. The rate was about three times as often as its big index fund rivals and similar to the support rate of other big investors such as Charles Schwab Corp <SCHW.N> and Franklin Templeton, part of Franklin Resources Inc <BEN.N>.

State Street spokeswoman Olivia Offner declined to discuss individual votes but said in a statement that companies have responded to its concerns on issues including “improved disclosure on their sustainability practices.”

Some clients say BlackRock and Vanguard effectively press their concerns privately. They also cite efforts like the annual letter that BlackRock Chief Executive Larry Fink sends to other CEOs, in which he has raised topics including how environmental and social issues affect corporate valuations.

“There’s always room for improvement, but they’re taking it seriously and doing a much more proactive job” of pressuring companies on climate and other issues, said Vermont Chief Investment Officer Eric Henry, speaking about top index fund firms. He oversees about $4.5 billion, including assets managed by BlackRock.

Walden’s Smith acknowledged that private pressure can work but said the major index funds need to vote critically to reinforce their message.

“The problem is we have no insight into what’s said in those meetings,” he said. “You don’t know whether they soft-pedal it.”

In late 2016, the $3 billion SCERS pension publicly rebuked BlackRock – which managed about $350 million of the system’s investments – for its “reticence to oppose management, limited focus on environmental and social issues, inconsistency between their proxy voting record with their policies and public pronouncements and limited transparency on investment stewardship activities,” as an official put it at a board meeting.

Officials at the plan put BlackRock on watch status, which could have led to it being dropped as an investment manager. Two years later, in December 2018, the Seattle system ended its review and kept its money with Blackrock, with a staff memo noting among other things the asset manager had voted to support a few climate risk resolutions in 2017 and 2018. Of 25 climate risk shareholder proposals in the 2018 proxy year, the company voted in favor of two, BlackRock told the Seattle retirement system in a letter reviewed by Reuters.

The Seattle system’s staff also noted that BlackRock had started providing some details on its engagements with companies behind closed doors. “Yet to assess the efficacy of these engagements, BlackRock must continue to increase its transparency,” the memo states.

Blackrock’s hesitance to back climate-related shareholder proposals contrasts with warnings it has raised about financial impacts on businesses from climate concerns.

Earlier this year, for example, the BlackRock Investment Institute warned investors in commercial real estate, municipal bonds and utility companies that the value of those assets could tumble because of climate-change impacts.

Aging infrastructure and older design standards, for example, leave assets at publicly traded utility companies vulnerable to extreme weather events such as wildfires and hurricanes, the institute said in an April report. The report followed California utility PG&E Corp’s <PCG.N> declaration of bankruptcy in January, after its market value plummeted as the company’s equipment was blamed for wildfires in California.