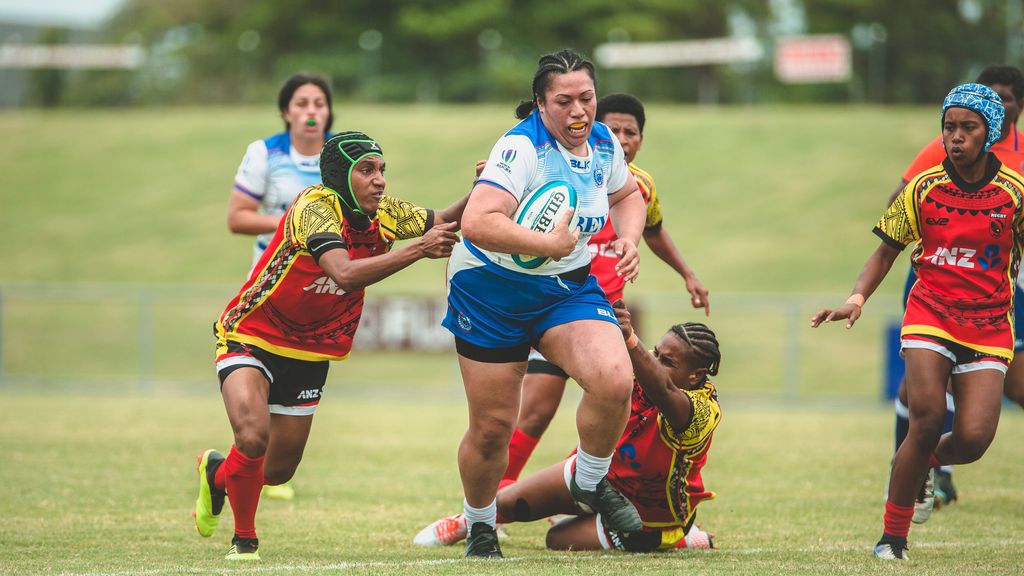 Samoa began their bid to qualify for Rugby World Cup 2021 as winners of the Oceania Rugby Women's Championship in style with an emphatic 65-12 win over Papua New Guinea in Lautoka, Fiji. Picture: WORLD RUGBY

LAUTOKA, 20 NOVEMBER 2019 (WORLD RUGBY) – Samoa began their bid to qualify for Rugby World Cup 2021 as winners of the Oceania Rugby Women’s Championship in style with an emphatic 65-12 win over Papua New Guinea in Lautoka, Fiji.

With Tonga’s match against Australia A in round one cancelled on health grounds and declared a draw and Fiji losing badly to the Black Ferns Development XV, Samoa are setting the early pace in the race amongst the four non-qualified teams for the ticket to New Zealand.

Winger Apaau Mailau and debutant Apaau Mailau both grabbed hat-tricks for Manusina in a solid display that will have pleased head coach Ramsey Tomokino, especially with a crunch match against Fijiana coming up on Friday.

PNG’s Palais, who were 44-0 down at half-time, never gave up and scored two tries of their own. Fullback Fatima Rama showed every bit of her blistering pace to get the Palais on the board with an 80-metre try on the hour mark, before adding another with five minutes to go.

The highest placed of the non-qualified teams at the end of the 12-day long competition will join the eight teams who have already confirmed their presence at RWC 2021. Samoa are top on five points with Tonga second on two. Fiji and PNG have yet to get off the mark.

In a contest every bit as one-sided as the first, the Black Ferns Development XV despatched Fijiana 53-0 in the second match of the day.

Canterbury centre Grace Brooker cemented her reputation as one of New Zealand women rugby’s hottest prospects with an influential try-scoring display and several other players put their hands up for senior selection in the emphatic win.

A brace of tries were scored by Natahlia Moors and Leilani Perese, with Joanah Ngan-Woo, Lauren Balsillie and Hazel Tubic also adding their names to the list.

Fijiana Captain Sereima Leweniqila said that the team expected it to be tough with so many new players coming up against class opposition.

“We were trying to work on our set pieces and our defensive line. All of this is really a psyching up to the game on Friday, which is the Rugby World Cup qualifying one,” Leweniqila said.

“The main focus on Friday is to come away with a win and hopefully we can do that,” she added.