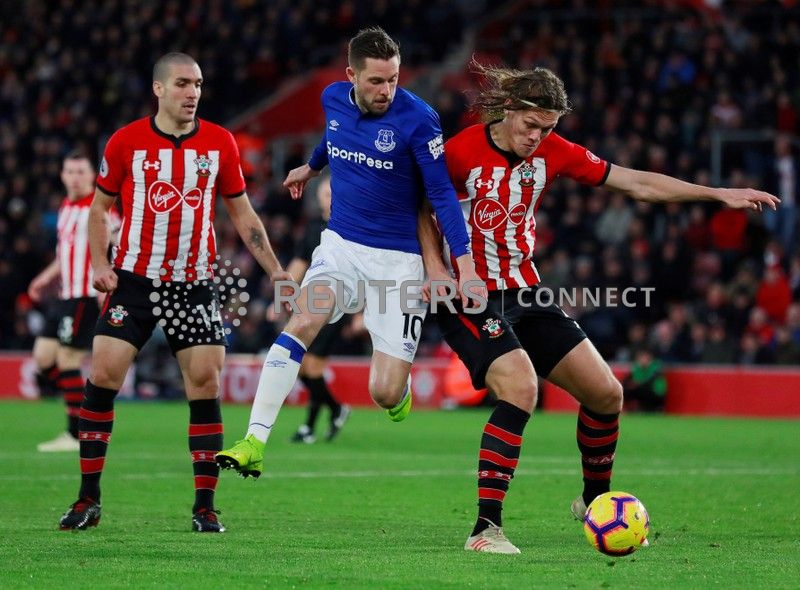 (Reuters) – Southampton earned a crucial 2-1 win over Everton at St Mary’s on Saturday but had to endure a nervy finish as they boosted their battle against Premier League relegation under galvanising new manager Ralph Hasenhuettl.

James Ward-Prowse scored a superb individual goal just after the break before a Lucas Digne own goal looked to have comfortably sealed a deserved win for the Saints in the 64th minute.

Yet a goal at the start of stoppage time from Gylfi Sigurdsson gave the home fans a nervous finish as eight minutes were added on, much to Hasenhuettl’s consternation, while Everton pushed for the equaliser.

The win pushed Southampton into 15th place on 22 points, three clear of the relegation zone, as they won only their second home match of the season — both coming under the stewardship of their impressive new Austrian boss.

“We played a fantastic game today, it could be four or five, fantastic football and defence. A great win for us,” enthused Hasenhuettl, talking to the BBC.

“The strength you could feel it every second today. The guys really showed they are focused and committed and that is the key for the future.”

Southampton merited the win after dominating the first half and twice striking the woodwork — first, as Nathan Redmond hit the post and then as Andre Gomes hit his own side’s upright while trying to defend another attack from Danny Ings.

Saints got the reward for their enterprise when Ward-Prowse was given too much freedom to maraud towards the Everton goal and smashed a 50th-minute shot past goalkeeper Jordan Pickford.

The hapless Digne then toe-poked the ball past Pickford while desperately trying to quell an attack from the ever-dangerous Redmond in the 64th minute before Everton’s late attacks came to nothing.

Southampton have now taken 13 points in eight games since 51-year-old Hasenhuettl arrived at St. Mary’s in December – four more than they had managed in their preceding 15 matches.

“When you lose like we lost this afternoon, we are not happy, we didn’t perform well and they deserved three points,” said Everton manager Marco Silva.

“Southampton are giving everything to get out of the danger zone so it is important we give the same,” added the Portuguese, whose side lie 11th in the table.