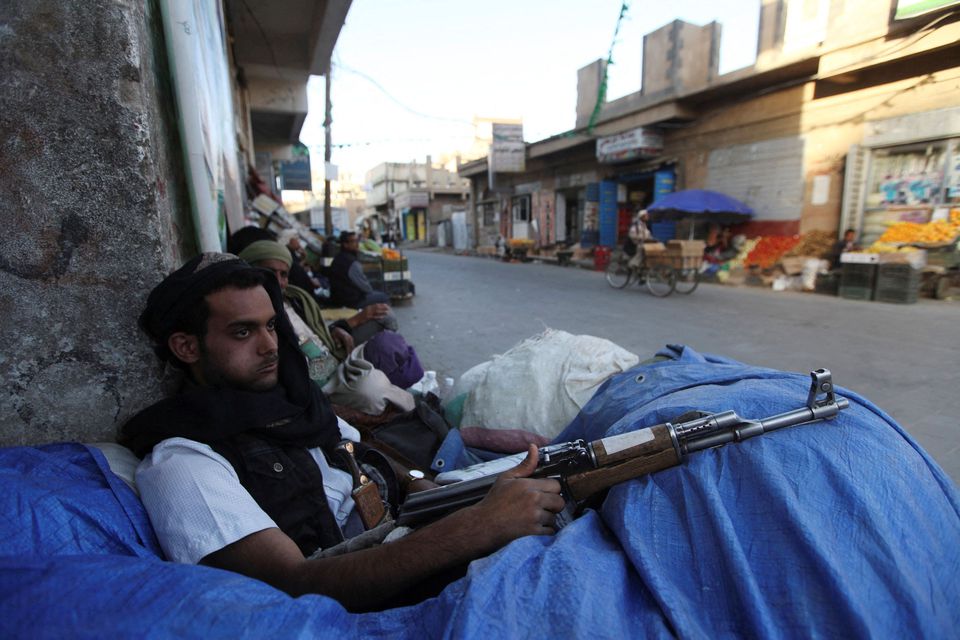 A Shi'ite Houthi fighter sits behind sandbags near a checkpoint in Sanaa December 17, 2014. REUTERS/Mohamed al-Sayaghi/File Photo

His comment at a news conference came shortly after the Emirati Embassy tweeted that UAE Ambassador Yousef Al Otaiba urged the Biden administration to restore the designation in response to Monday’s strikes on Abu Dhabi airport and a fuel depot. read more

Asked if he supported returning the Iran-aligned Houthis to the U.S. list of foreign terrorist organizations, from which they were removed nearly a year ago, Biden replied, “The answer is, it’s under consideration.”

But he conceded that “it’s going to be very difficult” to end the conflict pitting the Houthis against Yemen’s internationally recognized government and a Saudi-led military coalition to which the UAE belongs.

Biden’s comment reflected the lack of progress toward ending the war since he launched an initiative shortly after taking office a year ago to bolster U.N. efforts to restart peace talks and end what the United Nations calls the world’s worst humanitarian disaster.

The UAE welcomed Biden’s comment, the Emirati Embassy said in a tweet. The “case is clear – launching ballistic and cruise missiles against civilian targets, sustaining aggression, diverting aid to Yemeni people,” it said in the tweet.

As part of the initiative he launched last year, Biden named veteran U.S. diplomat Timothy Lenderking as a special envoy. The State Department also reversed a last-minute Trump administration decision placing the Houthis on the U.S. list of foreign terrorist groups, subjecting them to financial sanctions.

Three people died in Monday’s drone and missile attack claimed by the Houthis.

In response, the Saudi-led coalition on Tuesday staged airstrikes on the Houthi-held capital, Sanaa, killing at least 20 people including civilians, according to Houthi media and residents – one of its deadliest attacks since 2019. read more

The embassy, in a second tweet responding to Biden’s consideration of the terrorist designation, said that Otaiba pressed the case for re-designating the Houthis in his meeting with Sullivan.

Lenderking began a new mission to the Gulf on Wednesday in a bid to reinvigorate the peace process and tamp down the surge in violence, the State Department said in a statement.

The envoy “will press the parties to de-escalate militarily and seize the new year to participate fully in an inclusive U.N.-led peace process,” it said.

“Austin conveyed his condolences for the loss of life, and underscored his unwavering support for the security and defense of UAE territory against all threats,” the Pentagon added.