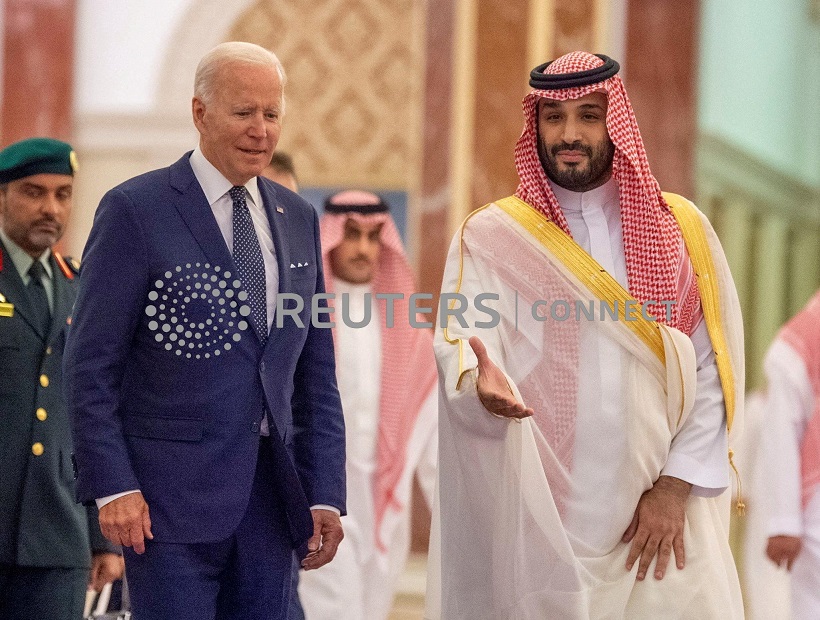 Biden, speaking after meetings with Saudi Arabia’s top leaders, said the crown prince, known as MbS, denied involvement and said he had held those responsible to account.

Biden shared a fist bump with MbS and shook hands with King Salman after arriving in Saudi Arabia.

“With respect to the murder of Khashoggi, I raised it at the top of the meeting, making it clear what I thought of it at the time and what I think about it now,” Biden told reporters.

“I was straight forward and direct in discussing it. I made my view crystal clear. I said very straightforwardly, for an American president to be silent on an issue of human rights is inconsistent with who we are and who I am.”

U.S. intelligence says the crown prince directly approved the murder of Khashoggi, a Saudi insider-turned-critic, by Saudi agents. Biden said what happened to Khashoggi was outrageous.

“He basically said that he was not personally responsible for it,” Biden said of the crown prince’s response during their meeting. “I indicated that I thought he was.”

The president said they also discussed energy and that he expected to see “further steps” from Saudi Arabia, a major oil producer, on energy in the coming weeks.

As a presidential candidate, Biden had said the kingdom should be made a “pariah” on the world stage because of the murder. He said on Friday he did not regret that comment.

Energy and security interests prompted Biden and his aides to decide not to isolate the Gulf oil giant that has been strengthening ties with Russia and China.

The president’s interaction with the crown prince drew criticism at home – beginning with the fist bump.

At the start of Biden’s Middle East trip, officials said he would avoid close contacts, such as shaking hands, as a precaution against COVID-19. But the president ended up engaging in hand-shaking during the Israel leg of the tour.