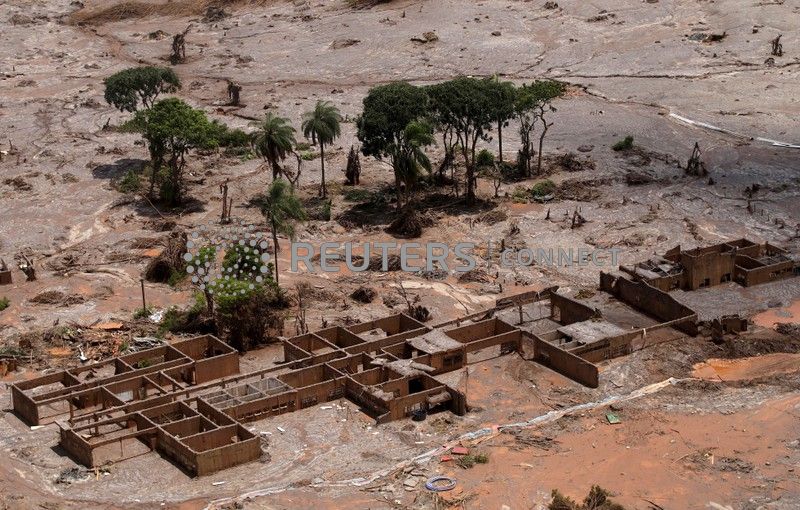 FILE PHOTO: The debris of the municipal school of Bento Rodrigues district, which was covered with mud after a dam owned by Vale SA and BHP Billiton Ltd burst, is pictured in Mariana, Brazil, November 10, 2015. REUTERS/Ricardo Moraes/File Photo

LONDON (Reuters) – Anglo-Australian mining giant BHP is facing a landmark, $5.0 billion damages claim in England for being “woefully negligent” in the run-up to a 2015 dam failure that led to Brazil’s worst environmental disaster, a lawsuit alleges.

The claim, which will be largest group action to be heard in England, was served on the miner on Tuesday on behalf of 235,000 Brazilian individuals and organizations, including municipal governments, utility companies, indigenous tribes and the Catholic Church, according to law firm SPG Law.

BHP spokesman Neil Burrows said the miner intended to defend itself against the proceedings, brought in the north western English city of Liverpool.

The collapse of the Fundao tailings dam, which stored mining waste and is owned by the Samarco joint venture between BHP and Brazilian iron ore mining giant Vale, killed 19 and spilled about 40 million cubic meters of toxic sludge into communities, the Rio Doce river and Atlantic Ocean 650 km away.

“Driven by concern for declining revenues amidst the falling market price of iron ore, the company took risks, increased production and turned a blind eye to dangers that ultimately claimed lives and destroyed communities,” said Tom Goodhead, a partner at SPG Law, which is representing claimants.

“BHP was woefully negligent in its duty of care and the damages sought are entirely commensurate with the devastation the company has wrought…,” he added.

Brazil charged 22 people in 2016 with offences, including murder, over the Fundao dam’s collapse. The miners last year settled a 20 billion reais ($5 billion) civil claim with local authorities to establish a clean-up fund. Other public cases, such as a $40 billion civil reparation case, are suspended.

BHP, which has separately settled a U.S. investor class action and continues to battle Australian shareholder lawsuits, has rejected all charges against the company, as well as current and former staff.

Although the disaster ranks as Brazil’s worst environmental catastrophe, the collapse of a Vale-operated tailings dam in the town of Brumadinho in January left a higher death toll, currently estimated at 300 people.