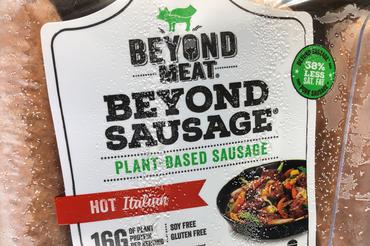 FILE PHOTO: Products from Beyond Meat Inc, the vegan burger maker, are shown for sale at a market in Encinitas, California, U.S., June 5, 2019. REUTERS/File Photo

(Reuters) – Beyond Meat Inc’s (BYND.O) quarterly results showed on Tuesday that the plant-based burger maker spent more than expected on dealing with the fallout of weak demand from restaurants, sending shares down about 7% after the bell.

El Segundo, California-based Beyond Meat typically gets about half its global sales from restaurants, many of which closed stores and limited menus during the quarter due to COVID-19. But as fast-food orders slumped, demand from grocery shoppers on lockdown surged and Beyond Meat had to spend nearly $6 million to reroute products to retailers like Walmart (WMT.N) and Costco (COST.O).

“We had to figure out how to continue to grow in an environment where half our business, essentially, deteriorated,” Chief Executive Ethan Brown said.

Beyond Meat repurposed a “meaningful” amount of inventory that was previously intended for fast-food chains. The process involved retrieving finished products from third-party warehouses across the country, transporting them to manufacturing facilities, repacking them into retail-friendly boxes, and sending them to new warehouses.

The added costs widened Beyond Meat’s quarterly net loss to $10.2 million from $9.4 million, even as sales surged 69% to $113.3 million and beat analysts’ expectations by nearly $14 million.

Beyond Meat’s exposure to small restaurants is slightly concerning because some may never reopen or may downsize menus because of the pandemic, CFRA Research analyst Arun Sundaram said.

U.S. retail sales nearly tripled to about $90 million in the quarter ended June 27, while revenue from international stores rose about 167% to $9.6 million.

Results were also helped by newly launched value packs and deep discounts the company gave some U.S. retailers this summer, hoping to take a bigger share of the burger market as beef prices rose due to COVID-19. The value packs were in stores only for the last two weeks of the quarter, but accounted for 16 percentage points of U.S. retail sales volume growth, Beyond Meat said.