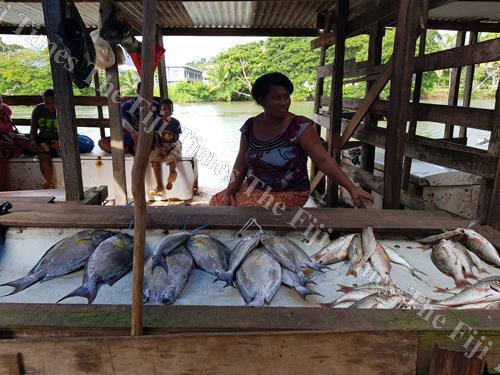 Members of a youth club from Macuata sell fish at the Labasa Market. Picture SUPPLIED

THE Ministry of Fisheries has advised members of the public to be wary of Ciguatera fish poisoning during this festive season.

According to a statement from Government, Ciguatera is a toxin produced by marine micro-algae specifically a dinoflagellate, called Gambierdiscus toxicus.

Tropical marine fish accumulate this toxin through their diet by eating algae or smaller fish and when humans eat contaminated fish, they develop a condition called ciguatera fish poisoning.

Ciguatera Fish Poisoning commonly occurs in tropical and subtropical areas, particularly in the Pacific Ocean, the Indian Ocean, and the Caribbean Sea.

The ministry has advised that when embers of the public buy fish, they need to be wary of certain fish that could contain these poisonous toxins.

Ciguatera poisoning mostly occurs in areas which has rapid increase of algae in the water system, nutrient enrichment through land run-off and high oil spills especially near jetties.

Ciguatera poisoning usually starts 2-24 hours after eating fish with this toxin and the most common signs are; numbness in fingers, toes, lips, mouth and throat, burning sensation on contact with cold water, join and muscle pain as well as nausea, vomiting, diarrhoea and severe headache.

Members of the public are advised to seek medical attention at the on-set of the symptoms and also refrain from eating reef fish for at least six months after treatment.