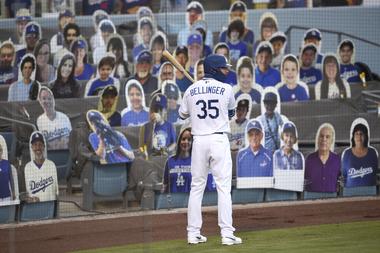 Mookie Betts led an electric power display Thursday, hitting three home runs, while finding his way into the record book, as the Los Angeles Dodgers rolled to an 11-2 victory at home over the San Diego Padres.

In just his 19th game with his new club, Betts hit home runs in the second, fourth and fifth innings. One came off Padres starter Chris Paddack while the other two were off Luis Perdomo. Betts has seven home runs on the season.

Corey Seager, A.J. Pollock and Austin Barnes also went deep as the Dodgers emerged from some recent scuffles that saw them score just three total runs in the first two games of the series against the Padres, both defeats.

The victory earned the Dodgers a 2-2 series split. They have not lost a series in six tries so far this season.

Dodgers starter Julio Urias (2-0) gave up two runs on five hits over 6 1/3 innings with no walks and three strikeouts. It was his longest outing in four starts this season.

The Padres got first-inning home runs from Tommy Pham and Eric Hosmer. Paddack (2-2) gave up six runs on six hits over three innings with one walk and one strikeout. It was Paddack’s shortest start of the season and the second shortest of his two-year major league career.

Seager, who homered in his first at-bat of the game, was playing for the first time since Friday, after he departed that game with a lower back strain.

Seager and Pollock both hit home runs in the first inning. Pollock’s fifth of the season gave Los Angeles the lead for good at 3-2. After Betts hit his first homer of the night in the second inning, a two-run shot, Pollock had an RBI double in the third for a 6-2 lead.

Barnes and Betts both homered in the fourth, with Betts crushing another one an inning later, again with a runner aboard, to give the Dodgers an 11-2 advantage.