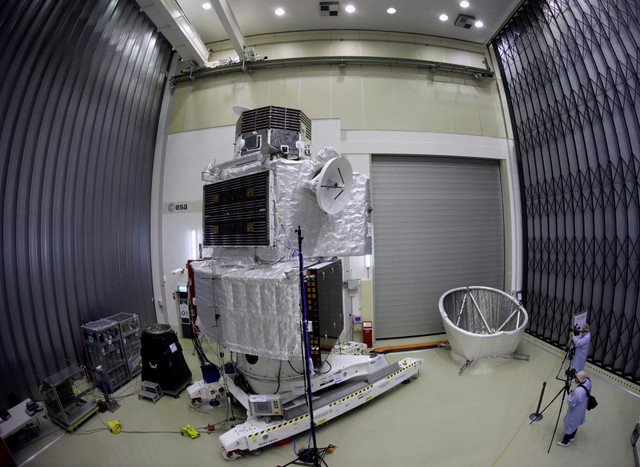 TOKYO (Reuters) – A European-Japanese spacecraft set off on a treacherous seven-year journey to Mercury to probe the solar system’s smallest and least-explored planet.

The BepiColombo mission, only the third ever to visit Mercury, blasted off from Europe’s spaceport in French Guiana aboard an Ariane 5 rocket at 10:45 p.m. local time on Friday (0145 GMT on Saturday), according to the Japan Aerospace Exploration Agency (JAXA).

“Launching BepiColombo is a huge milestone for ESA (the European Space Agency) and JAXA, and there will be many great successes to come,” ESA Director General Jan Woerner said in a statement.

“Beyond completing the challenging journey, this mission will return a huge bounty of science.”

Surface temperatures on the planet can reach highs of over 400 Celsius (752F) during the day and drop to minus 170C (minus 338F) at night.

NASA’s Mariner 10 probe, launched to Mercury in 1973, mapped around 45 percent of the planet’s surface, and its MESSENGER mission took off over three decades later in 2004 to complete the survey.

BepiColombo, named after 20th century Italian mathematician and Engineer Giuseppe (Bepi) Colombo, will slingshot off the Earth’s gravitational field one-and-a-half years after launch before picking up speed on its journey. It will fly past Venus twice and then fly by Mercury six times before slipping into its orbit around December 2025.

At that point, it will release two separate spacecraft it is carrying, ESA’s Mercury Planetary Orbiter (MPO) and JAXA’s Mercury Magnetospheric Orbiter (MMO).

MPO will then study Mercury’s surface and internal composition, to determine the planet’s iron content and examine why its core is partially liquid.

Both orbiters will study the planet for one year, with scope for possible one-year extension.

Nadi council advises ratepayers to be vigilant of diseases