Belarus would consider Russian athletes who wish to switch allegiance 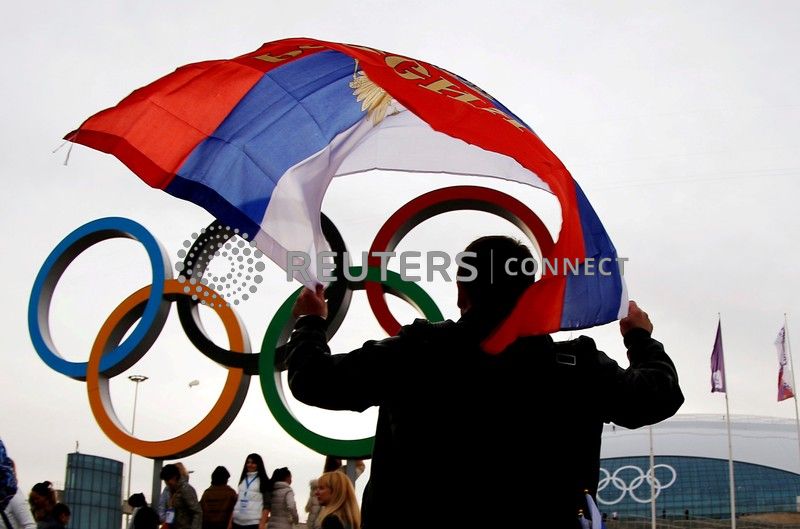 FILE PHOTO: A man carries the Russian flag past the Olympic rings at the Olympic Park during the 2014 Sochi Winter Olympics February 22, 2014. World Anti-Doping Agency has banned on December 9, 2019 Russian athletes from all major sporting events in the next four years. REUTERS/Brian Snyder/File Photo

(Reuters) – Belarus would consider offers from Russian athletes who wish to switch allegiance and compete for the ex-Soviet republic instead, the head of the Belarusian athletics federation said on Wednesday.

Russian athletes are currently barred from competing under their country’s flag at major international events, including the Olympics, for four years after the World Anti-Doping Agency(WADA) found that Moscow had provided it with doctored laboratory data.

The opportunity for Russians to compete as neutrals is also on hold after Russia’s suspended athletics federation missed a deadline to pay millions of dollars of a fine to the sport’s global governing body World Athletics.

“It’s too early to talk about any decisions and steps but we are closely following the development of events and, if we receive offers from Russian athletes, of course, we will consider them,” Vadim Devyatovskiy, the head of the Belarusian federation said.

“They are not strangers after all. In addition, the careers of some of the leading (athletes) in the world are now at risk,” added Devyatovskiy, who won a silver medal in the hammer throw at the 2008 Olympics.

“If these athletes are forced to miss the Olympics or, moreover, finish their careers, this will be a loss not only for the Russians, but also for world athletics.”

Some of Russia’s top athletes reacted angrily to the federation’s failure to pay the fine, with high jump world champion Maria Lasitskene saying she was ready to leave Russia and compete for another country.

“Any option for my further actions, including leaving the Russian team, must not be excluded,” Lasitskene said. “I’m tired of the lawlessness that has been happening over the past five years.”

World Athletics requires a minimum three-year waiting period before an athlete may transfer to represent another federation as well as evidence that the country is offering full citizenship and associated rights.

Belarus has won 14 track and field Olympic medals, including three golds, since the country gained independence from Moscow in 1991, making it the ex-Soviet republic’s most successful Olympic sport.