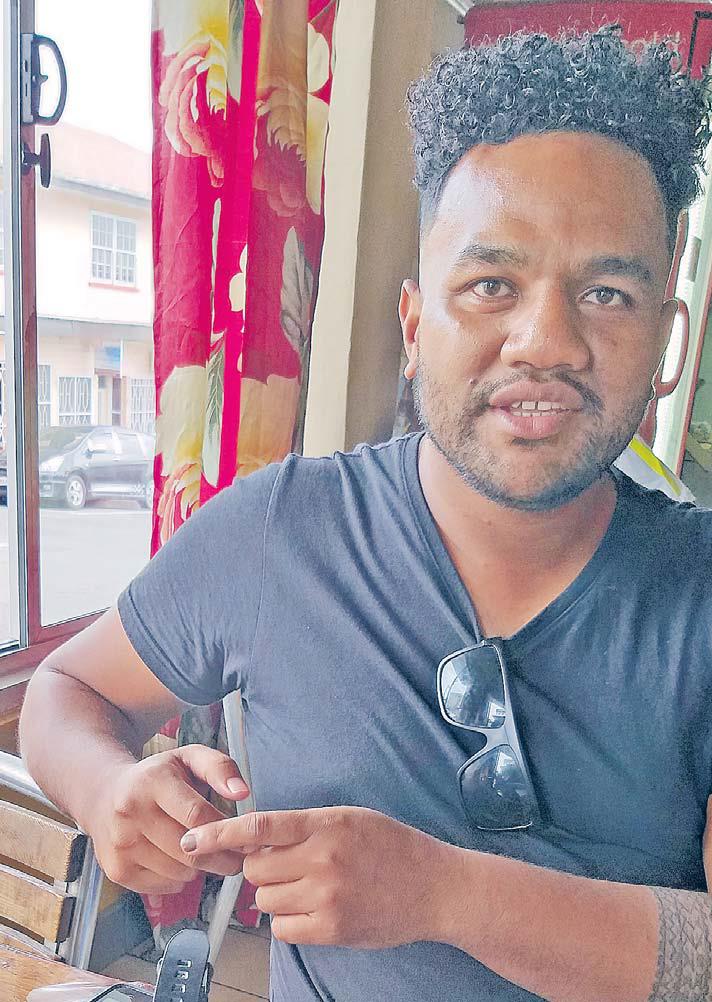 GROWING up, Takape Kamunaga was jokingly called the “Criminal” by his schoolmates.

It wasn’t because of petty crimes or unlawful things, but it was because of his unorthodox thinking and “crazy ideas”.

One example was when his school was told to bring something for their “Bring and Buy” sale at the school.

Takape turned up to school with a shoe polish and a brush and offered to shine his schoolmates’ shoes for money.

“When the teachers saw me polishing away, they immediately reported me to the vice-principal,” laughed the 31-year-old.

“But I saw it as a market — an untapped market seeing that all the students wore sandals. The teachers saw it differently because it was associated with street kids and delinquency. I got told off that day. This did not stop me coming up with crazy ideas. I’d be selling bean and doing various things to earn money.

“I wasn’t good at school academically but I was good at making a sale and was quite mischievous.”

Whether good or bad, it was probably a trait that brought Takape this far.

Today, he is a self-made entrepreneur after opening his own rental and tour company in the heart of Suva early last week.

Called the Hebrew Rental and Tour company, he hopes to tap into the local and tourist market by giving tours around Suva and parts of Viti Levu and hiring out his vehicles.

Takape said he still pinched himself at what he had managed to achieve.

“When the landlord handed me the keys to my new office, I was emotional. Maybe because of the way I grew up and the circumstances of where I came from.

“For a young person who came from a farming background, who grew up planting cassava, and to even catch a boat to Suva and now starting a business right in the heart of Suva is just surreal. “So for me — its my upbringing that motivated me.”

The Gau native grew up on a coffee plantation estate at Naiyalayala on Taveuni to a mechanic father and a sale assistant mother. He is the youngest of three siblings and the only boy.

In 1997, the coffee estate got bankrupt — his father lost his job, and so Takape and his father began grass cutting to earn a living as well as helping out at their farm.

But Takape didn’t see his future in agriculture.

“When I was in Form Six I knew I wasn’t going to make it academically, because I was cheeky and playful. So I did holiday jobs at supermarkets and hotels and saved up for my first year tuition at the Fiji National University by myself. My parents didn’t know — it was sort of a backup in case I failed at school,” he laughed.

Unbeknownst to his parents, Takape had a plan to get out of the island. When news came that his elder sister would be starting studies at the University of the South Pacific, he knew it was his chance to leave.

“My mother was near sighted so she needed me to accompany them to Suva. But deep inside I knew I was leaving Taveuni for good. We got off the boat on Friday and the following Monday while my mother was with my sister enrolling for USP, I was at FNU enrolling myself in a Trade Certificate in plumbing and sheet metal. They didn’t even know what I was up to. I paid for my first semester from my earnings and later called my dad and told him. He was caught off guard by it,” said Takape.

“After talking it over with him — he finally agreed to support my education. I later passed and graduated. I am not only an entrepreneur but a licensed plumber.

“Today I am still trying to come to terms with my journey as mission worker as well as a business entrepreneur,” said the devoted Christian.

“My best highlight was calling up my parents and telling them about my new business and they’re proud of me.

“One of the things that really pushed me to start out on my own was my the trip to India. I think Fiji doesn’t have poverty, I think we’re just lazy and complacent.

“In India, we see true poverty. When I walk past the slums it was hard for me to go past, when you see people living with just a tarpaulin above their heads and they lie directly on top of the mud for years. It really made me wake up. I found myself being complacent and I wasn’t aware of it because of
my laidback nature. I had a lot of ideas and goals but I was complacent about it.

“There’s a lot of young men in Fiji — it doesn’t matter what race, nationality or faith, who are not realising their dream and reaching their potential. We just need to get out there and work hard for it.”

“I aim to keep challenging myself. There’s no turning back now,” he said with finality.