Behind the News: The truth never dies 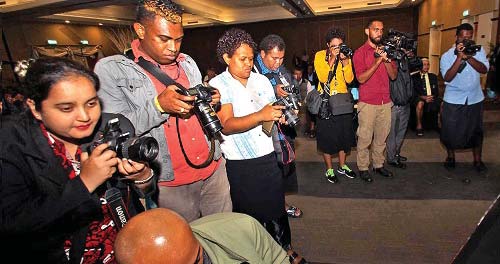 A Government minister recently took a swipe at this newspaper for doing its job.

In fact, with the emergence of social media in the past few years, societal views of the news media as a cornerstone of democracy are quickly changing around the world.

Change has also come about in the form of frequent assaults and slurs against the media.

It has reached a point where the notion of the press as the purveyor of public good, that speaks the truth and holds leaders accountable, is slowly getting its appeal.

In newsrooms, the heartbeat of a free press, turbulence is building up.

They have long been battlegrounds for influence where predators of power, from politicians and corporate tycoons to media owners and powerful NGOs, jostle to control the news agenda.

Protecting media freedom will come down to journalistic ethics.

Assistant Minister for iTaukei Affairs, Selai Adimaitoga, in the last Parliament  session blamed reckless reporting by journalists as “one of the causes of violence and economic destruction over the past years”.

She said the dishonest media had played a role in every troubling event in Fiji’s history.

That statement was nothing but an exaggeration.

When news outlets and their journalists are targeted and unfairly blamed by the government for the ills of society, then citizens are in trouble.

The blame helps consolidate the culture of impunity and fuels intolerance and rights abuses.

The truth is no democracy is ever vibrant unless it genuinely embraces press freedom.

Nor can any government profess to be truly fair and impartial if journalists are discouraged from investigating its wrongdoings and pointing out the truth.

The press, when doing its work truthfully and honestly, should force politicians to adjust and grow to be more transparent not more tyrannical and savage in its charges.

“Journalism and the media are essential to peace, justice, sustainable development and human rights for all,” United Nations Secretary-General, Antonio Guterres said in a statement in 2019.

Ms Adimaitoga said every media organisation should only speak the truth and fairly report on facts, adding “the media have a responsibility to publish the truth” and not publish things that would stir “political instability or violence”.

The democratic mandate and duty to tell the truth is what this paper daily seeks and aspires to do.

When this paper started 152 years ago, its young founder used the truth as a vehicle to bring hope, spark debate, provoke action and take to the forefront critical issues affecting Fiji.

In fact, George Littleton Griffiths, in his first editorial noted “the only promise that we can make is that we shall watch the times and try and make our paper a public good, a practical, useful and honest medium for the support of honour, truth and right!”

So when a politician chooses to publically remind The Fiji Times to “tell the truth” it can be taken as an attempt to say “you are not doing enough to tell the truth”.

Those in power need reminding that telling the truth will require a government that is unafraid of being criticised for both its deliberate wrongdoings and honest mistakes.

It must not only demand from the media accuracy in speaking the truth but also demonstrate a willingness to tell the truth about the very decisions and mistakes it makes.

It also means that the media should not be stopped from holding powerful people accountable for their actions.

They should not fear punishment for speaking out the truth.

Journalists cannot perform their duty of telling the truth if they are under a climate of fear — for criminal charges, police investigations and court battles that may threaten their work and personal freedom.

This paper and its journalists go to great lengths to empower Fijians with information and amplify the frail voices of the downtrodden.

We do our best to hold politicians accountable and highlight the problems of human suffering, corruption, sexual and genderbased violence and discrimination, among other things.

Sometimes we work in dangerous places and during dangerous times.

We risk our personal safety and freedom. Some of our colleagues have lost their lives trying to reveal the truth.

Does this sound like the work of those who want to hide the truth?

The answer is no!

Just like our doctors and nurses who have been on the frontline during COVID-19, our journalists on a daily bases, stand on the frontline sounding the alarm, questioning government officials and dissecting tough issues.

While the media does not cause every “violence and economic destruction” in Fiji, it is often the first responder in every one of them — demanding an honest answer and telling honest truths.

This paper was also last week criticised for being “anti-government” and “proopposition”.

This newspaper provides coverage that allows for a plurality of voices that reflects Fiji’s rich diversity.

It is through allowing a wide range of voices in the media and not only the voices of leaders, that Fijians can truly enjoy the freedom of expression and have a culture of tolerance and non-discrimination.

A trustworthy and reliable newspaper cannot side with the government or be part of its propaganda machinery.

People will always need the credible information and analysis provided by free and pluralistic media to make the right choices.

If we allow this paper to be the mouthpiece of the government, we would fail miserably in our democratic duty to hold leaders accountable and uphold good governance principles.

Fiji needs strong leaders that can defend and protect the free media, not those whom will jump at the slightest chance of throwing a shadow and ridicule journalists’ honourable work of telling the truth.

Fiji also needs leaders who get of their way to create the conditions that enhance the work of the press and are willing to investigate cases of attacks on journalists.

Media independence and freedom are indispensable preconditions of a well-functioning democracy.

They are things that we must all aspire to reach.

“The work of journalists helps us to know the world around us and enables everyone to live in dignity.

“The work of journalists and media professionals… reminds us that the truth never dies,” Mr Guterres said.

“Neither must our commitment to the fundamental right to freedom of expression. Reporting is not a crime. We must all stand up for journalists, for the truth and for justice.”

Until we meet again on this same page at the same time next week, stay blessed, stay healthy and stay safe.