Behind the News: Shrinking civic spaces 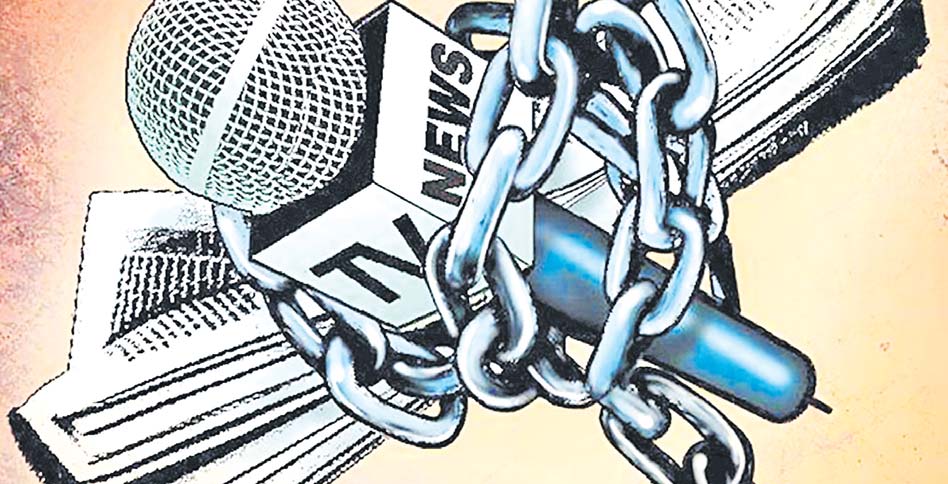 According to the United Nations Educational, Scientific and Cultural Organization (UNESCO), 85 per cent of the world’s population experienced a decline in press freedom in their country over the past five years. Picture: SUPPLIED

This week UN Secretary-General, Antonio Guterres, reminded the world, and Fiji, that democracy was backsliding while civic space was shrinking.

He said distrust and disinformation were growing and polarisation was undermining democratic institutions tasked with the custodianship of democratic ideals, safeguarding human rights, ensuring checks and balance.

“Now is the time to raise the alarm,” he warned the world.

“Now is the time to reaffirm that democracy, development, and human rights are interdependent and mutually reinforcing.

“Now is the time to stand up for the democratic principles of equality, inclusion, and solidarity.”

Mr Guterres’ comments came in the wake of International Day for Democracy, commemorated every year around the world on September 15.

The international day, among other things, provides an opportunity to review the state of democracy in which we live.

It is a time to review our actions, ensuring they stem from our core belief that democracy requires the participation of all citizens –- you and me and our families.

The UN day is also an opportunity to highlight the important role of parliaments, and to celebrate their capacity and mandate to deliver on justice, peace, development and human rights.

The focus of this year’s commemoration was protecting press freedom as an integral part of protecting democracy as a whole.

On that theme, the United Nations says the upheaval in Europe reminds the world that our democratic principles are “constantly under threat”.

Now more than ever before, misinformation and disinformation are growing while threats to the freedom of journalists and media workers are expanding by the day.

According to the United Nations Educational, Scientific and Cultural Organization (UNESCO), 85 per cent of the world’s population experienced a decline in press freedom in their country over the past five years.

It says throughout the world journalists and the media face attacks – online and offline.

There has also been an increase in detention and the use of defamation laws as well as cyber security or hate speech laws to curb freedom of expression.

Ideally, we need a free, independent and pluralistic media to keep the public informed on matters of public interest.

This enables the public to make informed decisions and hold governments to account, key ingredients to democracy.

So when media freedoms are under threat — the flow of information is “stifled, skewed or cut off entirely” and journalists around the world face limits to their ability to operate freely, impacting on human rights, democracy and development.

“The COVID-19 crisis has also shown how it has become more critical than ever for the media to gather and evaluate facts and fight disinformation. Equally critical is ensuring online safety and security,” says UNESCO.

Attempts to silence journalists are growing more brazen by the day and they often pay the ultimate price.

From 2016 to the end of 2021, UNESCO recorded the killings of 455 journalists, who either died for their work or while on the job.

Over the past few years, there has been a lot of debate on the state of Fiji’s democracy, the health of our institutions and the decisions and actions of our leaders.

In June this year, results of an updated rating by CIVICUS Monitor noted that the civic space in Fiji remained “obstructed”.

Three months earlier, in March to be exact, Amnesty International’s annual report came out and pointed out that freedom of expression and the right to assembly in Fiji were restricted by “repressive laws”.

In May 2022, Fiji’s NGO Coalition on Human Rights (NGOCHR) raised concerns around allegations of police brutality and the use of excessive and unreasonable force by police officers.

On May 9, 2022, global press freedom watchdog Reporters Without Borders (RSF) reported that Fiji had been ranked as the worst place in the Pacific region for journalists according to their latest assessment.

The country slipped by 47 places compared with its 2021 rankings, when it was placed 55 out of 180 nations.

Responding to the RSF report, the Fijian Media Association said this was “another clear reminder to the government to review and remove sections in the Media Industry Development Authority Act that imposes harsh penalties on the media”.

It said the fines were “too excessive and designed to be vindictive and punish the media rather than encourage better reporting standards and be corrective”.

Now, as we move closer to the general elections, our democracy is again being put to the test.

Citizens will be required to participate by choosing their preferred “servant” through the ballot during a time when democracy has been questioned and doubted.

In his International Democracy Day public message, the Speaker of Parliament Ratu Epeli Nailatikau has reminded Fijians about taking part in the elections.

“We are in the election period where Fijians will soon be asked to exercise their right to vote for their representatives in Parliament,” Ratu Epeli said.

He said democracy was a “neverending process”.

This week, there were fresh calls from civil society, questioning authorities’ control of the media.

The centre said true democracy meant that freedom of expression and media are protected without fear and intimidation.

The NGO Coalition on Human Rights believes true democracy means that every Fijian should be able to have a say in decisions that affect their lives.

They say democracy is more than just holding elections or checking boxes of conventions ratified and international obligations met, but it means that freedom of expression and free media are protected without fear and
intimidation.

The coalition adds that a true democracy is one that is inclusive, transparent, accountable and representative of everyone, and free from any form of discrimination.

The focus of this year’s International Day of Democracy on having an independent and pluralistic media is something that we should support.

We also hope that our leaders will have the foresight and vision to protect media freedom and freedom of expression, as core democratic pillars.

Without these safeguards, we cannot live in a society that upholds fairness, equality and justice and democracy weakens.

“Without a free press, democracy cannot survive. Without freedom of expression, there is no freedom,” Mr Guterres has reminded us.

“On Democracy Day and every day, let us join forces to secure freedom and protect the rights of all people, everywhere.”

Before I end, congratulations to our Fiji Airways 7s team for winning the Melrose Cup and kudos to our Rooster Chicken Fijiana 15s team for defeating the New Zealand Wahine Maori.