Behind the News: Public consultation and empowerment 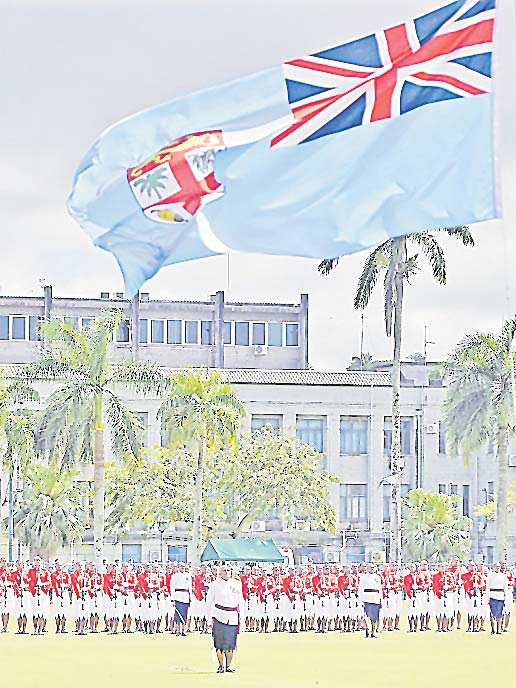 As we stand united under noble banner blue. And we honour and defend the cause of freedom. Picture: RAMA/FT FILE

What had been a national symbol of unity and pride since 1970 was to change to ‘reflect a sense of national renewal’ and ‘reinforce a new Fijian identity’.

There was no consultation done to find out whether Fijians wanted to change their flag.

Civic participation only took place when members of the public were encouraged to send in their designs to a 13-member flag committee.

This was a competition for money.

On June 9, the committee had selected 23 designs for public deliberation.

Responses from all forms of the mainstream, social and alternative media was immediate and overwhelming.

Government did not give up easily.

It followed up with the National Flag Protection Bill 2015.

The Bill contained rules that, among other things, discouraged citizens from using the flag to demean, disrespect or insult the state, the government, any member of the government et cetera.

Inevitably, Government later was forced to abandon its plans to change the Fiji Flag.

Mr Bainimarama said in a statement on August 18, 2016 that government had decided that “the flag should not be change for the foreseeable future”.

The reason was because it was a question of “resetting national priorities as our people continue to recover from Tropical Cyclone Winston.”

TC Winston had caused widespread devastation in February, 2016 and money was needed to deal with the natural disaster.

“The cost of any flag change is better spent at the present time assisting Fijians back on their feet,” Mr Bainimarama said while justifying why the flag change plan had been shelved.

But we all know the reason was not so much the competing priorities but because Fijians had simply rejected the proposed flag(s) outright from day one.

At the time, many segments of society said government had the responsibility to include key stakeholders in the decision-making process when developing important changes like changing a national flag.

Today, public consultation is not a luxury.

It is a necessity, especially when sweeping change that affects every citizen is being proposed.

It is a law-making tool used to improve transparency, efficiency and effectiveness of our laws, and encourage you and myself to participate in decision-making.

When government notifies the public about key decisions, it is simply communicating information to its citizens.

That is one-directional and top-down in nature.

Holding a public consultation is different.

Firstly, in terms of political governance, it involves actively seeking out the opinions of interest groups and individuals.

Unlike, notifications, it involves a two-way flow of information and is largely concerned with collecting information as a basis for drafting policies and laws.

In this way, laws correspond to people’s needs.

Secondly, through the process of consultation, the citizen gets empowered to actively take part or participate in public life.

Thirdly, through the participation of individual citizens or groups, they become more willing to comply or obey laws, consensus is reached and political support is gained.

People feel valued when they are consulted.

This increases their sense of “ownership” of change and commitment to change.

It was yet another example of how the lack of public consultation could result in public uproar and distrust in public authorities.

The intention was relatively good, that is “to review the Police Act of 1965” but for a piece of law that would be far-reaching, especially when it proposed to give a wide scope of powers to the police, the public should have been more actively involved.

There was the Bill 17 of July, 2021, which was criticised by a huge cross-section of the Fiji public.

Again, its problem was landowners were not consulted.

There are other examples of laws being passed without regard for proper and genuine public consultation and participation.

These have all caused public furore and created a dent in the image of government.

Recently, there have been concerns on the quality of public consultation over the minimum wage rate.

In Labasa, the biggest town in the north, in fact where I have been writing from in past weeks, the consultation on the minimum wage rate was scheduled for only two hours.

Some feel there should have been a few more consultative sessions so that submissions could be more representative in nature.

Time allowed for any consultation on national issues should be realistic to allow the public enough time to provide a considered response.

Two hours is not enough.

Public consultation in which the public is not widely consulted, or where participants complain about lack of feedback time, will result in a rushed document that does not truly capture the public’s mood and thinking.

Now we are hearing concerns that the Fijian Elections Office’s voter registration and awareness sessions may be too short or not long enough to allow effective engagement.

Whatever the truth is with the latest two public consultation and awareness sessions going on simultaneously at the moment, we hope our leaders will ensure best practices when conducting them.

Consulting the public is one thing.

Doing it with a genuine purpose is another matter altogether.

Pseudo consultation is just for ticking the box and is a waste of time and public money.

When going out to rural and remote areas where people’s education levels affect their ability to participate, it is important that more time is taken to develop the capacity needed before they can raise a comment, make a point or form an opinion.

Consultation should be broad-based and sufficient resources must also be allocated to ensure a fair representation of minority groups and vulnerable parts of the population.

As citizens, each and every one should not feel afraid to take up the responsibility of participating in public consultations.

It is not just a right but a noble duty as well.

We must all view public participation as an opportunity to be empowered to make powerful decisions that affect us.

We must demand that it is done properly.

When well thought out and implemented correctly, the time and effort spent on public participation can reap rewards.

It can result in more widely acceptable and sustainable decisions that people would be most willing to accept and support.

Until we meet again on this same page same time next week, stay blessed, stay healthy and stay safe.