‘Be clinical’: It should be another step up against Australia – Tuqiri 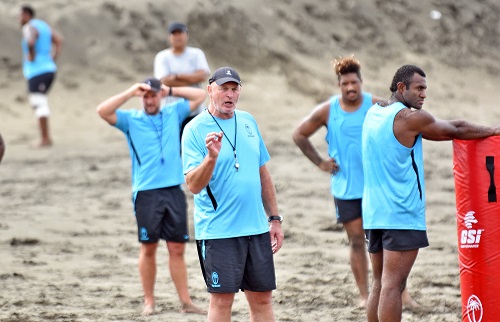 Dual rugby international Lote Tuqiri says the Flying Fijians should be clinical if they want to stop Australia A in the second round of the 2022 Pacific Nations Cup this weekend.

The Vern Cotter-coached Fijians meet the Aussies at Churchill Park in Lautoka this Saturday after beating Tonga in Suva on the weekend.

“Fiji will test Australia’s defence this week. I think Australia will try and control the set pieces and keep the game tight,” said Tuqiri, who is in Fiji for promotional rugby programs.

He was at Albert Park in Suva yesterday conducting coaching clinics as part of the PacificAusSports program.

He said the Fijian side should play with sound defence to stop the Aussies from scoring.

“Fiji has always been known for its attacks. Their defence against Tonga was phenomenal.

“To keep the scoreline at zero is something that cannot be underestimated.

“The coaching staff of the national team has their defence on song and it should be another step up against Australia A this week.

“They (Australia A) will try and throw varieties of attacks in the set pieces. Fiji should disrupt that and play a good style of rugby. Their set-pieces last week against Tonga were really good. They dominated the scrums on a few occasions and it was a big tick for me if I was the head coach.”

The Vodafone Flying Fijians take on Australia A at 3.30pm, while Samoa will face Tonga at midday.

Tuqiri will be at the Christian Mission Fellowship Primary School today for more clinics.