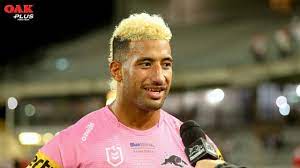 The Fiji Bati squad members who will take the field in the National Rugby League preliminary finals and grand final will face it tough.

They will have less than seven days to gel with the rest of the Fiji team before their Rugby League World Cup opening match against Australia on October 15.

Maika Sivo, Waqa Blake and Reagan Campbell-Gillard will start for the Parramatta Eels as they travel to North Queensland to face the Cowboys on Saturday.

The players will also miss the RLWC warm-up match against England on October 7.

Vodafone Fiji Bati head coach Josaia Rabele left the country yesterday for Australia where he and the other squad members will gather before they fly to England on Sunday.

“The players in the NRL finals will join the team later,” Rabele said.

“They will also miss the friendly against England.”

Fiji’s other pool opponents are Italy and Scotland.