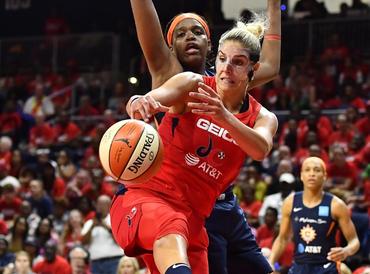 (Reuters) – An injury to Washington Mystics forward Elena Delle Donne could flip the Women’s National Basketball Association (WNBA) Finals on its head but the team are refusing to panic as they contemplate life without the game’s best player.

The reigning WNBA Most Valuable Player was diagnosed with a herniated disk after leaving early during a Game Two loss to the Connecticut Sun on Tuesday that tied the best-of-five series at one game apiece.

Delle Donne, who scored a team-high 22 points in Game One to lead the way for the Mystics, is having treatment and an update on her status will be given on Saturday with Game Three of the championship series scheduled for Sunday at Connecticut.

“Our players have faith in each other right now. We know what offense works with the group that we have. Some things are different for Elena, some are the same,” Washington head coach Mike Thibault told a conference call on Thursday.

“It’s certainly a huge weapon out of the lineup if she doesn’t play but our team has a good feel for who is there to play and I think they know how to take care of each other.”

Delle Donne played about 3-1/2 minutes in Tuesday’s game before she left with back spasms after making a spin move toward the net. She went right to the locker room and never returned.

Without one of the game’s most dominant players, the Mystics were badly outrebounded and, despite erasing a 10-point halftime deficit, were not able to overcome the loss of Delle Donne, who was hampered by a bone bruise during last year’s Finals loss.

“Obviously it sucks,” Mystics guard Natasha Cloud said on the conference call. “But we’re going to hold it down regardless. With or without Elena this team is capable of winning this championship.”