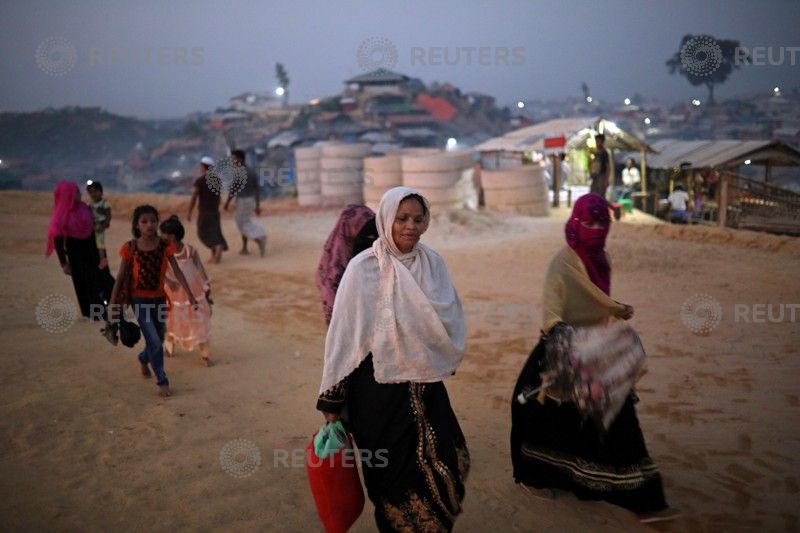 Rohingya refugees walk along the road in the evening at Balukhali camp in Cox’s Bazar, Bangladesh, November 16, 2018. REUTERS/Mohammad Ponir Hossain

COX’S BAZAR, Bangladesh (Reuters) – Rohingya refugees from Myanmar in camps in Bangladesh began a protest on Monday, demanding that Bangladesh recognise their ethnicity as Rohingya and that officials and aid agencies stop sharing their family information with Myanmar.

Markets were shut at several of the refugee camps in southeast Bangladesh because of the protest. Rohingya working with non-government groups and the U.N. High Commissioner for Refugees also boycotted their jobs as part of the strike.

“The term ‘Rohingya’ is very important because we have been persecuted because of our identity,” the protesting refugees said in a statement, adding that while the term was banned in Myanmar, it should not be banned in Bangladesh.

Rohingya regard themselves as native to western Myanmar’s Rakhine State but Myanmar authorities and many citizens regard them as illegal immigrants from the Indian subcontinent.

Many are stateless as a 1982 law restricts citizenship for the Rohingya and other minorities not considered members of one of Myanmar’s “national races”.

The Myanmar government refuses even to use the word “Rohingya”, as that would imply a distinct identify, instead calling them “Bengali”.

Bangladesh has been urging the refugees to accept smart cards that help with identification and the distribution of aid. The smart cards however, identify an individual as a “forcibly displaced Myanmar national” and not as Rohingya.

The protesters also expressed concern about a UNHCR plan to collect biometric data and copies of documents, as they fear the UNHCR and Bangladeshi authorities could share the data with Myanmar, which could use the information against them.

Firas Al-Khateeb, a UNHCR representative, said data was being collected for a verification process which would help Rohingya refugees get better protection and ensure their access to services in Bangladesh.

“It is not linked to repatriation,” he said, adding that the data was jointly maintained by Bangladesh and the UNHCR.

Refugees are refusing to return to Myanmar under a repatriation plan unless demands for justice, citizenship and the ability to go back to their original villages and lands are met.

The refugees say they had to flee from their homes after Myanmar soldiers and Buddhist civilians massacred families, burned villages and carried out gang rapes.

U.N-mandated investigators have accused the Myanmar army of “genocidal intent” and ethnic cleansing.

Myanmar denies almost all the accusations, saying its forces engaged in a counter-insurgency operation against “terrorists”.