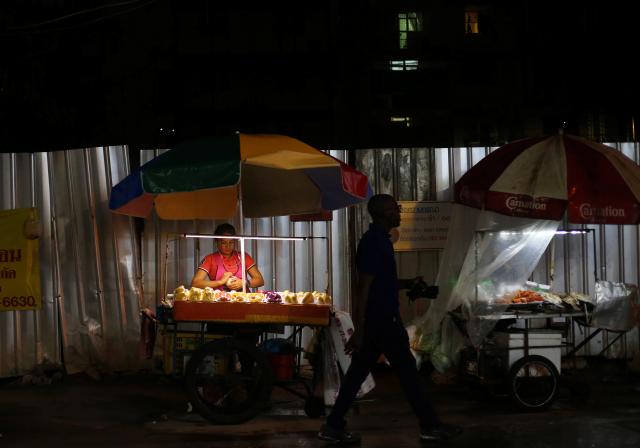 BANGKOK (Reuters) – “Quick, move!” Bangkok street vendors call to each other as they rush carts laden with souvenirs and snacks from the city’s bustling Ramkamhaeng road, pushing their wares into an alley before the police spot them.

Once the backbone of Bangkok’s renowned roadside economy, thousands of licensed street vendors have spent much of the past two years being shifted to locations they deem less favorable, by authorities bent on improving hygiene and imposing order.

Thailand’s street stalls are usually a magnet for tourists in a country where tourism is a major source of income, and which has welcomed record numbers of travelers in recent years.

The military junta, however, has been keen to improve standards of living, particularly ahead of a general election penciled in for early next year – the first since it assumed power in 2014.

“The pavement is the pavement. It is not a place to sell things,” said Wanlop Suwandee, the Bangkok governor’s chief adviser. “We are doing this in earnest, to return the pavement to the people.”

The Bangkok Metropolitan Administration (BMA) has moved 20,000 street vendors from 478 locations since 2016. It told Reuters it has identified 205 more locations to address, and that in recent weeks it has increased the rate of clearance. Vendors who return to cleared areas risk being fined.

But some relocated street vendors said much-reduced foot traffic at their new pitches is threatening their livelihoods.

In response, 1,200 members of the Network of Thai Vendors for Sustainable Development marched to the prime minister’s office on Sept. 4 and submitted a letter demanding a halt to evictions and calling on officials to find a solution together.

“They can clean up the streets but please don’t get rid of us entirely,” said Lewan Choptha, 54, a souvenir stall owner and one of group’s leaders.

“It doesn’t just affect the vendors. It affects the customer as well – low income earners, for example, or those who have to travel a long way to work in Bangkok,” said Chidchanok Samantrakul from Women In Informal Employment: Globalizing and Organizing (WIEGO) and co-author of a report on street vendors.

They are also of cultural significance. The government of nearby Singapore long ago moved street sellers to hawker centres, and last month proposed their inclusion in the UNESCO Representative List of the Intangible Cultural Heritage of Humanity.

Having come to regard sales on a public thoroughfare as a nuisance, Bangkok authorities are similarly moving street sellers to alternative locations such as indoor markets.

“This is nothing to do with the election,” Wanlop said. “People have complained they can’t travel safely on the pavement … sometimes they have to walk on the road.”

However, some street vendors said business conditions at new locations are so dire that they were prepared to risk fines of as much as 300 baht ($9.19) to go back to their former pitches.

“It was a narrow market on the second floor of building. It was impossible to sell anything,” said a seafood seller who opted to return. “Before, I had enough to pay for school, water and electricity. Now we have to rely on loan sharks who charge us 20 percent interest.”