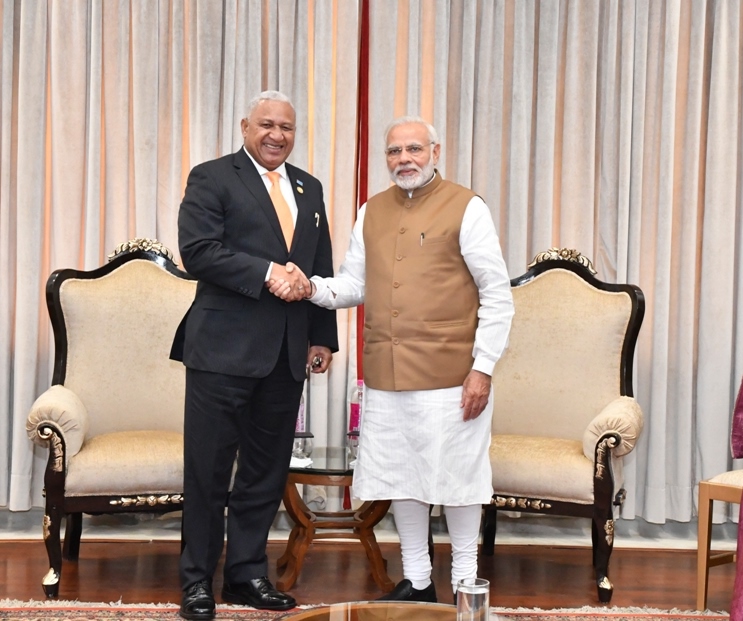 Prime Minister Voreqe Bainimarama with his Indian counterpart, Narendra Modi during a bilateral meeting on the margins of the ISA meeting. Picture: SUPPLIED/FILE

In a congratulatory letter to Mr Modi following his re-election, Mr Bainimarama conveyed his warmest congratulations, saying the people of India have yet again demonstrated their commitment to strengthening their democracy.

Mr Modi’s party secured 350 seats out of the total 542 seats, making him the third Indian Prime Minister to have retained power for a second term in the Indian political history.

Mr Bainimarama said Mr Modi’s re-election was testament to his exemplary leadership and the notable confidence that the people of India had in his vision for a robust and inclusive India.

“For a leader and its government, nothing is more comparable to a victory that emanates from an increased majority for a second-term in power,” Mr Bainimarama said.

“You have provided an exceptional leadership to the world’s largest democracy selflessly in various capacities and I am confident that you will successfully lead India for the next five years, building its relations with all nations for peace and security.

“On behalf of my Government and the people of Fiji, I once again convey to you my heartiest congratulations and wish you good health, prosperity and peace.”

Meanwhile, in a statement on Friday, Fiji Labour Party leader Mahendra Chaudhary said PM Modi has a led a stable government in his first term in office and this was the reason behind his second victory because people trusted him.

“The people of India have given you an overwhelming mandate in a show of confidence in your government,” Mr Chaudhary said.

He said Mr Modi brought about many well placed social, economic and administrative reforms that won him another five year term in government.