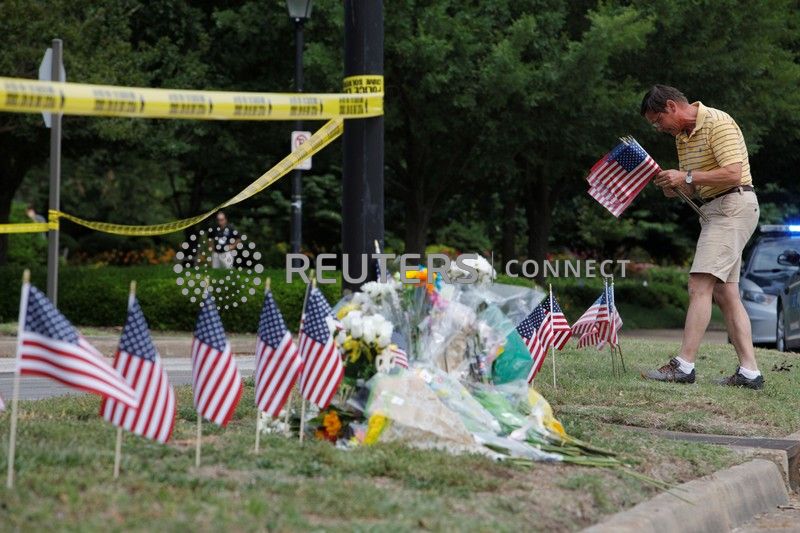 (Reuters) – The 12 victims of Friday’s mass shooting at a Virginia Beach municipal building included an engineer who had recently taken up the bagpipes, an account clerk with a beautiful singing voice and a Belarusian immigrant, according to friends and relatives.

It remained unclear on Monday why the alleged gunman, DeWayne Craddock, opened fire at the resort city’s Department of Public Works, where he had worked for almost 15 years before handing in his resignation hours before the attack. He was fatally shot by a police officer.

The shooting was the deadliest instance of U.S. gun violence since November, when a dozen people were slain at a Los Angeles-area bar and grill by a gunman who then killed himself.

Among the victims who had most recently joined Public Works was Christopher Rapp, who was about to mark his first anniversary at the job. After moving to the Virginia Beach area, Rapp had nursed his love of Scottish music by joining the Tidewater Pipes & Drums.

“He was quiet but had a passion for the pipes and Scottish culture,” the band said in a tribute posted on social media, which was accompanied by a photograph of Rapp smiling at Celtic festival in 2018 dressed in a tartan kilt.

Tara Welch Gallagher, who had been an engineer at Public Works for six years when she was killed, was remembered as someone who “always had kind words to say” to friends or strangers in a tribute posted on GoFundMe, where supporters are raising funds for her 21-month-old son.

Alex Gusev, a right-of-way agent, emigrated from Belarus in 2003 to get a degree in civil engineering before joining Public Works nine years ago, according to a profile by the Virginian-Pilot. He enjoyed playing basketball and soccer with neighbours who had also emigrated from Eastern Europe, a friend told the newspaper.

Katherine Nixon, who had worked at the department as an engineer for a decade, was a mother of three young girls.

Ryan Keith Cox, an account clerk with the city’s Public Utilities Department for more than 12 years, came from a devout Christian family. “I won’t hear his beautiful singing voice at church or home anymore,” his brother, Ervin, wrote on Facebook.

Four other people hurt in the shooting remained in critical condition at local hospitals after surgery as of Sunday afternoon, according to a spokesman for the hospitals.

Virginia Beach Police Chief James Cervera described Craddock as “disgruntled,” but declined to say more about what may have precipitated the attack. He was an employee in good standing before handing in his resignation, officials said.

An impromptu memorial set up at the municipal centre was visited by well-wishers on Sunday, and media images show family and friends holding hands and lighted candles at multiple churches.