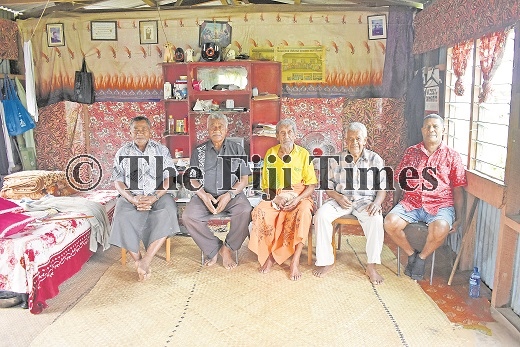 TADRAVAKASIGA, one of the most popular iTaukei music groups of the ‘70s and ‘80s, spent every Saturday and public holidays travelling to perform at events across Viti Levu.

Group leader Peni Vunisau said when they received an invitation to perform in Levuka, the band members grew excited.

“It was going to be a double celebration because he had received the Most Excellent Order of the British Empire (CBE) from Queen Elizabeth II in June the same year.

“Everybody was looking forward to the trip because most of the group hadn’t been to Ovalau or even sailed across the sea.

“This was like going overseas because none of us had been outside of Viti Levu.”

The trip across the Bligh Waters was full of excitement, the music group was looking forward to making their mark in their first trip “abroad”.

“Luckily, a big boat took us from Natovi Jetty to Buresala.

“I think if we had gone across in a small boat, most of the group members would have ran away because we were from the mainland and none of us were used to seeing the big ocean.

“And the huge waves in the Bligh Waters between Natovi and Ovalau were spoken about when we returned to our village, Muana, Tailevu, after the trip.”

The lead singer said the excitement went up several notches when they reached Buresala where a carrier was waiting to take them to Yarovudi Village.

After they presented their i-sevusevu, they had dinner and drank kava, waiting for the party that was going to be held the next day.

Vunisau said waking up in Yarovudi the next morning was like walking back in time.

Dr Bakani took the group for a sight-seeing trip to Levuka Town, the Old Capital of Fiji, and the band members soaked in the sights and sounds of the former administration centre of the British Colony.

“As the sun set that evening, the atmosphere was very beautiful because Yarovudi Village is just a few metres away from the sea.

“We could feel the fresh air and everybody was primed up and looked forward to the event.

“The party started with all the formalities, and then it was our turn to perform that night.

“As soon as we strummed the intro for the first song, all the ladies — our naita from Ovalau — came running and started dancing beside us.

“Sometimes the volume would drop because only three of us would be singing along with the ones who played the guitars.

“The rest of the band would be dancing with our naita, it was a wonderful night and everybody enjoyed it very much.”

Vunisau said the next morning Dr Bakani invited the group for a “wash-down” session.

“He was so happy and thanked us for the wonderful performance at his party.

“We drank one carton of whiskey and all knocked out because of the strong grog we had in Yarovudi Village, but the fresh fish they fed us while we were drinking, made the drinks go down very well.”

He said they spent four days in Yarovudi and they “enjoyed every second of it.”

Vunisau said news of their performances spread far and wide and invitations for them to perform at events kept coming from around Fiji.

“We were always based at our settlement called Natukitai, near Vunisei Village.

“Whenever we are about to go on a tour, all the group have to report in at Natukitai before we depart.”

“Sometimes when everyone is getting ready to leave, there is a small commotion.

“One of the girlfriends would decide to put our neatly ironed shirts in a bucket of water.

“These kinds of things used to happen.”

He said one time they had returned from a tour and had gathered at Natukitai to drink beer until Sunday morning.

“One of my tavale was drinking beer too, but he hadn’t prepared his family’s cassava for Sunday lunch.

“As soon as the beer finished early in the morning, he grabbed an empty bag and filled it with kumala and made his way home.”

Vunisau said the bag of kumala served two purposes — it helped him keep his balance and it placated his angry wife.

The group leader said Tadravakasiga had adventures and misadventures — but they all contributed to the experience of being in the band.