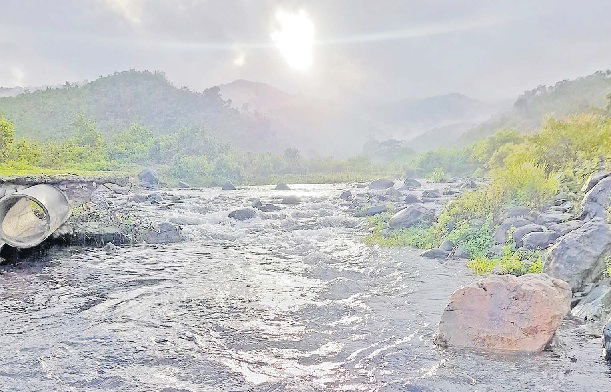 The Wainiagai River that runs beside Sawanikula Village in Naitasiri. Delai Nava hill is visible in the background. Picture: JONACANI LALAKOBAU

The song Lolo Mai Naua composed by Eminoni Qarailawaki, manager of village music group Seniboro Junior, relives the life of their ancestral god, Ratu Vunibula – the eight-headed snake – and the villagers of Sawanikula in the district of Muaira, Naitasiri.

Passed down through the generations, Qarailawaki composed a song about the legend in 2011 while singing for another group, Drodrolagi kei Delainava.

For Qarailawaki, he was carrying on the legacy of his elders who were members of the Seniboro Senior Group that was formed in 1988.

In 2017, he revived the village music group and named it Seniboro Junior after he and his son, Isaia Mara, who was a member of Voqa Vou Ni Medrau Sucu group in Nadakuni Village.

One of their songs, Kua Ni Vaka Tagici Au, was a hit on the iTaukei radio stations in 2017. He said the name “Seniboro” Junior was linked to boro – a green vegetable leaf known to the village of Sawanikula – where the yavusa Naboro derived its name from. He said as a tribute to his ancestors, he put together the song Lolo Mai Naua.

He said the song was about the journey of the ancestral god Ratu Vunibula and his party to Sawanikula Village.

They are believed to be the first people to settle in the upper Wainimala River. He said the song relives how the first settlers arrived in Veiseisei – among them were two ancestral gods – Ratu Tutunavanua – who is known to the people of the yavusa Tukani in Namotomoto, Nadi, and his younger brother, the eight-headed snake Ratu Vunibula who lived in a cave called “Tikonabalei” along the Wainimala River.

According to stories passed down orally through his elders, the brothers first had their meeting at Wailoaloa in Nadi before they parted ways. Qarailawaki said the cave “Tikonabalei” was once a tourist attraction and that it came in the form of a human being. He said a man with a buiniga (afro) would show up in the village.

Before people settled at Sawanikula Village, he said the eight-headed snake turned himself into an eagle and flew up the Wainimala River in search of a place to hide gold and mineral deposits.

The legend tells that he hid them in a mountain overlooking the village called “Delanivatutalei” or “Delainava”.

“If you look up that hill, it’s shaped like an eagle, the same eagle we believe links us to America,” he said. “One line in the song says “Kai Naboro, Na kai Merika”.

We believe that the eagle links us to the people of America, and that the eight-headed snake also changes itself to an eagle.”

When his ancestors left Veiseisei, he said some settled in Ra, while the others accompanied Ratu Vunibula (eight-headed snake) who journeyed further.

“While some settled in Ra, the three mataqali – Naqara, Tubalevu and Nabukawai – decided to carry on.

They travelled on a canoe named Buka Waiwai. “They reached the place where Ratu Vunibula asked ‘se siga, se sa bogi?’ (Is it day or is it night?), that is how we believed Sigatoka got its name.

“Then we reached another place where Ratu Vunibula then asked again ‘se yawa, se sa voleka?’ (Is it close or still far away?). This is how Nayawa got its name in Nadroga, that is now a place near the bridge near Sigatoka Town. “While approaching Navua, our ancestors saw an island from a distance.

It was called Naqara – linked to the mataqali Naqara and then from there, they saw land which they named Naboro.

They declared it as a meeting point for people from all backgrounds. The Naboro Prison Complex is now a place where inmates from all different backgrounds meet.”

He said they sailed further and got to a place which is now known as Walu Bay, named after the eight-headed snake Ratu Vunibula.

This is where the canoe Buka Ni Waiwai was anchored while people from the mataqali Naqara went further inland to search for land in the upper Wainimala River.

“Before people settled in the upper Wainimala River, we were the first to settle here. The elders of our mataqali came and established the boundaries between Namosi, Ra and Navosa.

“After they found the land where we could build our homes, they blew a cone shell to alert those waiting in Walu that we have found a place and that they have started sailing up the Wainimala River.

The mountain where we blew the cone shell is known as “Uvu uvu Ni Davui”.” He said they settled in the old village site before relocating to a land known as Bulibilinakuro in 1972.

“My ancestors decided to name our village Sawanikula – meaning Sawana Ni Koula (shores of gold), because when they first settled here, it was filled with gold and minerals.

They believe the largest gold and mineral deposit in the world is here.

“I was among a group who camped up in the mountains with an Australian mining company in 1992. They were prospecting for gold in the area, so we believe that this is a ‘shore of gold’ (Sawana Ni Koula).”