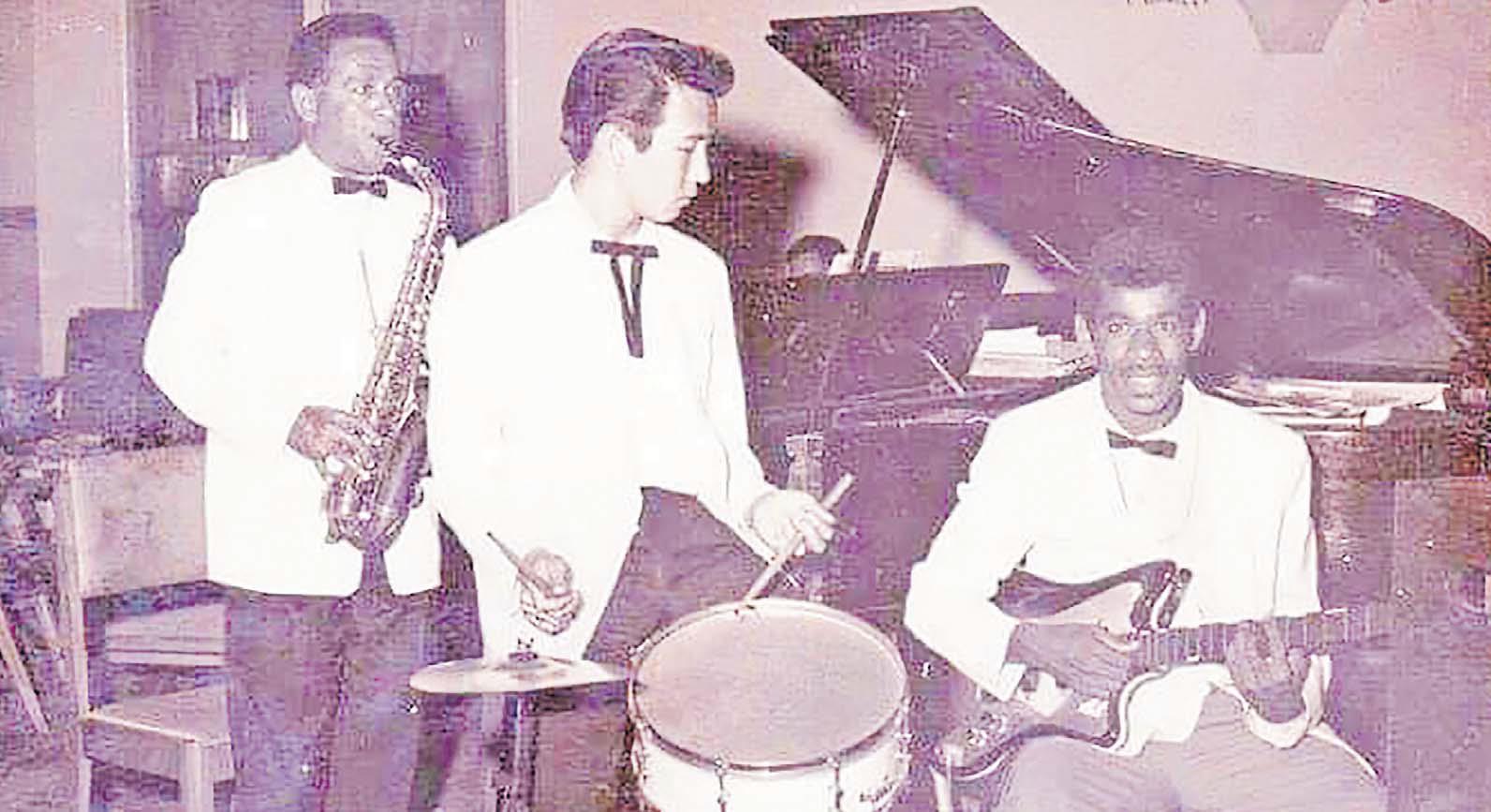 Mike Woo on the drums with Simi ‘Shucks’ Rabaka on the saxophone and Marika Rabaka on guitar at the Grand Pacifi c Hotel in the ’60s. Picture: PATRICK NAGIMA/SUPPLIED

In the ’50s, as Elvis Presley wowed fans across the world with his soulful voice and dance moves, a Fijian man of Chinese descent took on the king of rock’n roll’s style and gave it an island flavour that not only raised eyebrows – but also caught the attention of music lovers in Suva.

With his Elvis-style hairdo and motorcycle, Mike Woo cut a fine figure on and off the stage.

Offstage, he was often seen riding around on his Triumph motorcycle, clad in a leather jacket and jeans, zig-zagging around Suva’s streets.

On stage, he played a mean backbeat on the drum kit as he kept time for an outstanding musical ensemble known as the Suva Swingers.

Sadly, he is with us no more.

Mike was called to rest this week in Ohio, United States.

As tributes began pouring in on social media platform Facebook, many recalled his contribution to the local music scene.

“I remember going to his house in Nasese in the ’50s and listening to Les Paul records, it really helped me with my music.”

Les Paul, renowned as one of the pioneers of the solid-body electric guitar, was also an American jazz, country, and blues guitarist, songwriter, luthier, and inventor.

“I also remember some time in the 1950s when drums were first brought into Fiji and Mike was the first to play it.

“We all thought the instrument was too loud and it took us some time to get used to it because we were only used to the wa dua (tea-chest bass guitar).

“He used to play drums with the Suva Swingers but when he was asked to sing, he would grab a guitar and come to the font of the stage and imitate Elvis.”

Before migrating to the US, Woo shared the stage and jammed with some of Fiji’s musical greats, including Ken Jansen, Ben Rabaka, Wise Vatuwaqa, Sakiusa Bulicokocoko and Mawi.

But his musical mainstay was with the Suva Swingers, a band made up of his brother Noel Woo on saxophone, Jeffery Houng Lee on the piano, Simione ‘Shucks’ Rabaka on Alto saxophone, Gus Saffings on bass and Leslie Singh on guitar.

At 18, Mike was the youngest member of the group but loved every minute of it.

During an interview with The Fiji Times in March last year, he said the band used to perform at functions held at the Defence Club, Arts Club, Fiji Club, China Club and Grand Pacific Hotel among other venues.

He said this was before nightclubs became a thing in Suva, and New Zealand and US Naval and Air Force officers stationed at Laucala Bay were often in the audience.

“Although we had a core group of musicians, there were times we’d have guest artists come and jam with us, people like Charlie Moore on the banjo or Litia Daveta playing the piano and singing,” he said at the time.

He said local bands in the Suva circuit were playing sophisticated jazz and big band music, influenced by the records brought into the country at the time by the New Zealand and US servicemen and women.

Apart from bands like the Suva Swingers, musical groups made up of overseas servicemen also performed around the urban centre — setting a very high standard for local musicians to aspire to.

When Mike moved to the US with his wife Ronwyn and family, he continued to play music but had moved on to the guitar.

He continued playing at venues across Ohio, and stayed true to his love of the classics with songs like the Everly Brothers 1958 hit All I Have To Do Is Dream.

Moce mada Mike Woo, thank you for the memories and the music.