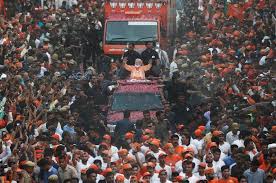 Prime Minister Narendra Modi waves towards his supporters during a roadshow in Varanasi, April 25, 2019. REUTERS/Adnan Abidi/Files

NEW DELHI/MUMBAI (Reuters) – We didn’t see it coming. The tsunami of support that propelled Prime Minister Narendra Modi and his Hindu nationalist Bharatiya Janata Party (BJP) into a second five-year term was a surprise to many of us reporting on the mammoth Indian general election.

Getting an accurate reading on how 900 million people will vote is extremely difficult and almost impossible to gauge from big cities like Delhi or Mumbai. Far in advance of the April-May voting, Reuters made a series of sorties into the farms and small towns where most of India’s people live to get a sense of what was being talked about, what was at stake.

As the two reporters leading the coverage in rural areas we knew our subject matter well. When there isn’t an election we are commodities reporters, talking to farmers and traders about sugar prices, or the quantity and quality of their potato and wheat crops.

We were among the first to cover the impact of a slump in crop prices on farm incomes last summer, and early in suggesting the tide was turning against the BJP in state elections in the last two months of 2018. We got that right – the BJP lost three key states.

And we didn’t just go to a couple of villages, we went to many. We didn’t just speak to a few people, we talked to dozens over a number of days – some land-owning farmers, some day labourers, others who were unemployed, and folks in the villages who serviced the economy, from electricians to shopkeepers.

Despite the rural anger, at no time did we get a feeling that Modi was going to lose the general election. The assessment by Reuters’ correspondents was that he was going to win with reduced support from voters and might need partners to stay in power.

But instead, the BJP increased its seats tally to 303 against 282 in the 2014 election. And including its partners, Modi’s National Democratic Alliance has more than 350 MPs in the lower house, close to the two-thirds majority it would require to make transformative changes to the Indian constitution.

Many Indian and foreign media also thought the election was going to be much closer than it was.

In our visits to the countryside, a sizeable slice of people who voted BJP in 2014 – 30-40% in some places by informal count – said they were considering voting for an opposition party, perhaps the Congress or a caste-based regional party. They felt forgotten by the BJP, their incomes were plunging and they were hurting.

But after a suicide bomber killed 40 Indian paramilitary personnel in Kashmir in February, and a Pakistan-based Islamist militant group claimed responsibility, the election focus immediately swung to national security from economic issues.

We decided to check back in the rural core of the country – and found that the attack and a strong response from Modi – including sending warplanes into Pakistan – had changed some minds and Modi was benefiting.

But the situation still wasn’t clear cut, and did not point toward the huge mandate that Modi eventually clinched.

During the campaign, Modi played up his image as the selfless son of a tea seller who led a simple life based around Hinduism – the religion of the vast majority of Indians – and a commitment to improving hundreds of millions of lives and a battle against corruption.

It may not have been the first thing people talked about, but the idea that India had a patriotic leader who put Hindus, the religion and its traditions first certainly resonated with many Hindus, while clearly alienating some in minority communities.

This was reinforced by a well-funded BJP organization that got the message out with brutal efficiency, whether through social media, mainstream media or at rallies and other events.

And then came Modi’s chance to show he was a strong leader.

“Things changed rapidly after our military aircraft attacked terrorist camps in Pakistan,” farmer Uday Vir Singh told Reuters this week by telephone from Kairana in Uttar Pradesh state. “That was an emotional time and sentiments played a big role,” he added, though he declined to say how he voted in the general election.

When we had visited Kairana in June 2018 to cover a key by-election, which the BJP lost, Singh and his fellow farmers blamed Modi’s policies for lower crop prices.

This time, the lack of resonance of policies put forward by Congress and other opposition parties, and the lack of leaders people could believe in, were also big factors in Modi’s win. We wrote about Congress’ poor communication, inability to make some alliances, and weak leadership, and how it could prove decisive.

It was also not clear in speaking to people how much some of Modi’s policies at the household level had been big hits. That building toilets, providing free liquefied petroleum gas connections and subsidised cooking gas, and bringing electricity to many places for the first time had enhanced Modi’s image, despite the overall rural distress.

It was all enough to get many voters to give Modi another chance to improve a troubled big picture.

So, what would we do differently next time? If anything, we would make more trips to the countryside and stay there longer. We would be more sceptical of the initial responses we get from people and push them harder to tell us whether that would really change their votes once they are in the polling station. We would ask more about their views of the alternatives in the opposition. We would be more aware of our limitations.