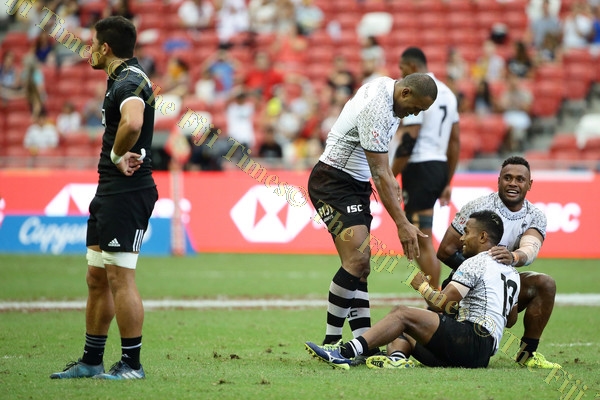 THE Fiji Airways Fiji 7s team is expected home this morning after capturing the hearts of Fijians over the weekend with its Singapore 7s win.

But for the man in command, Gareth Baber, the journey is not over yet, nor time to celebrate.

He wants his first World Rugby Sevens Series title and there will be no fancy stuff in the one month preparation ahead.

“It is going to be back to basics,” he said when asked after the Singapore 7s final on how he will prepare for the London and Paris 7s events next month.

The basics which Baber means is the natural Fijian flair compared with the structured styles other teams follow.

“We are confident in the way we play. We don’t play like anybody else which is of benefit to us and difficult for some coaches to annalyse and stop Fiji playing.”

The unorthodox Fijian style or open style of rugby such as throwing the ball around or passing, scissors passing, impromptu double ups, and off-loads are weapons Fiji teams unleash to our
advantage.

The Fiji Airways Fiji 7s team trend in the past four wins three are consecutive is an indicator on the bond among players, the strength, the speed and the experience packed in the team.

Before winning the titles, Fiji has beaten South Africa, New Zealand, Australia, England, USA and even Samoa. It’s scarce to find a team single handedly toppling the giants in the series before hoisting the cup.