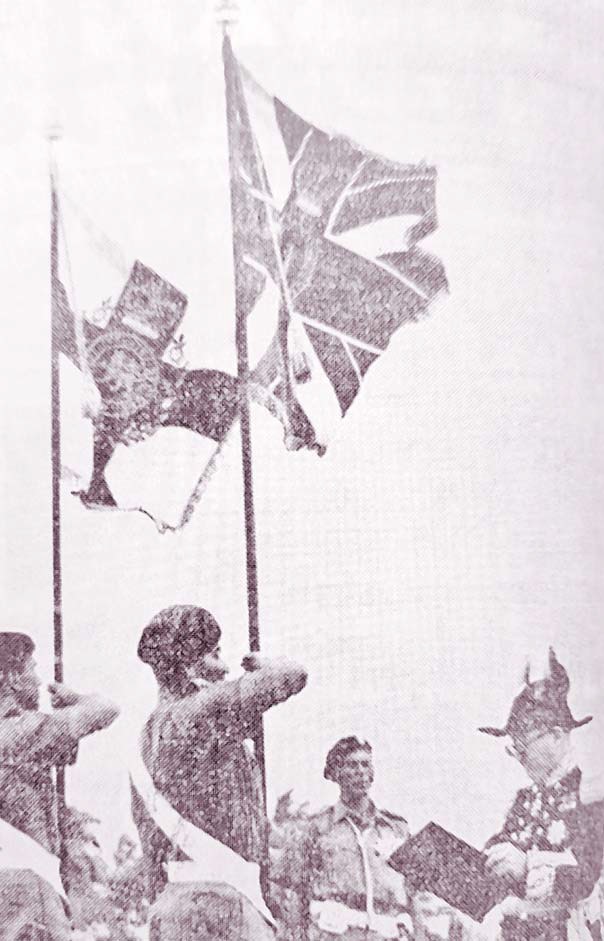 The old colours of the Fiji Defence Force had been given a new lease life by workers at the Royal School of Needlework in London — restoring the colours to its former glory.

The Fiji Defence Force colours once aged and fragile was later restored and mounted on the walls of the transept of the Centenary Methodist Church in Suva in 1958.

First laid up in the church after the return of soldiers from Malaya, the old military colours were sent to the Royal School of Needlework for restoration and later returned to Fiji.

On Friday July 18, 1958 this newspaper published an article on the story of the old colours. The article reported that the old colours were framed and preserved in 1958 from climate and pests and had an interesting history.

The colours which were donated by Sir Henry Marks were originally presented to the Fiji Defence Force by the Governor, Sir Arthur Richards, on May 9 1936.

The presentation ceremony was attended by 298 offi cers and members of the Fiji Defence Force and included the consecration of the colours by the Bishop in Polynesia, the Right Reverend L S Kempthorne.

The Reverend H Irvine, C Lelean and A Hardie attended as Chaplains to the Fiji Defence Force. One of the ensigns who received the original colours was Lieutenant J B K Taylor (later Lieutenant-Colonel Taylor (OBE) who commanded the 1st Battalion Fiji Infantry Regiment with distinction in the Solomons.

The other Ensign was 2nd Lieutenant G K Cakobau who is better known as Ratu G K Cakobau OBE, Roko Tui Tailevu and Third Native Member of the Legislative Council. In his address to the parade, Sir Arthur said in granting permission for the Fiji Defence Force to carry colours, the King had conferred an honour which was not lightly bestowed and therefore one which must be valued dearly. Since then, units of the Fiji Military Forces have lived up to that honour in their actions in the Solomons and in the jungles of Malaya.

This newspaper reported that many awards were won during those actions including the posthumous award of the highest British decoration for valour – the Victoria Cross to Corporal Sefanaia Sukanaivalu of the 3rd Battalion. The colours were first trooped on June 9 1937 on a parade held in honour of the King’s Birthday.

The parade which was held at Albert Park Suva was attended by 331 officers and members of the Fiji Defence Force. They were trooped again on June 8 1938 on a Kings Birthday Parade, but with the commencement of hostilities in 1939, the colours were stored away for the duration of the war. In 1950 according to the report, the colours were re-registered in the name of the 1st Battalion Fiji Infantry Regiment and in 1953 were shipped to Malaya where they were carried by the Battalion until the end of its tour of duty.

At that stage, the colours were in a very poor state of preservation and it was obvious that new colours would be required. The Fiji Defence Club generously offered to buy new colours which were to be presented to the Battalion on their return from Malaya. The offer was accepted and new colours were purchased in England.

They were presented by the Governor, Sir Ronald Garvey on a parade held at Albert Park in Suva on June 26, 1956. The old colours were trooped for the last time and marched off the parade to the tune of Auld Lang Syne.

On the following day, the colour were ceremonially laid up at the Centenary Methodist Church in Suva when the commanding officer, Liuetenant Colonel P K Ganilau DSO, delivered them into the hands of the senior chaplain to the Fiji Military Forces, the Reverend S G C Cowled OBE, for safe keeping in the church. The public had on several occasions the opportunity of seeing the new colours carried by ‘A’ Company of the 1st Battalion.

Those occasions included the visit of the Queen Mother, the funeral cortege of Ratu Sir Lala Sukuna and the Queen’s Birthday Parade.