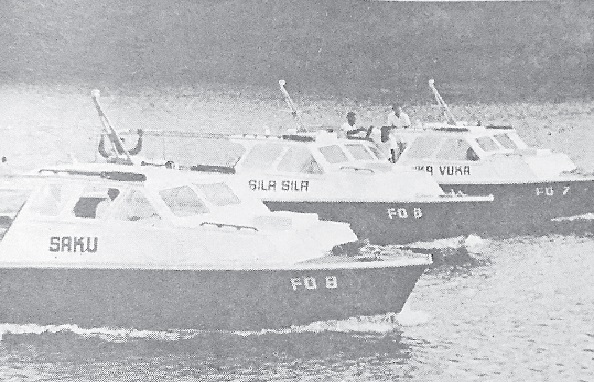 The three patrol boats given by the New Zealand government in 1973. Picture: FILE

Offenders against fishing laws in Suva and the outer islands were to get stricter enforcement with the introduction of three new fishery patrol boats.

This, according to an article published in The Fiji Times on May 16, 1973.

The boats were part of the New Zealand government’s $150,000 independence grant to Fiji. The New Zealand High Commissioner, Sir John Grace, presented the boats to the Government.

In handing over the boats, Sir John said the grant was a gesture of friendship and goodwill and such gifts could only enhance the good relations that exist between our two countries.

The boats, Saku, Ika Vuka and Sila Sila, were built at a cost of $50,000 by the New Zealand’s C. B Boatbuilders Ltd. Each boat was 27ft long and had a 150-horsepower Fordson turbo engine.

The boats were capable of speeds up to 18 knots with full equipment and a crew of two. The Saku was to be based in Suva, while Ika Vuka and Sila Sila would operate from Lautoka and Labasa.

The senior fisheries officer, John Spottiswoode, said the boats would enforce the fisheries laws both inshore and offshore.

“These come at a good time because the incidence of dynamiting in the Western Division has increased tremendously,” he said.

Mr Spottiwoode said that with the aid of the boats, officers would keep a check on the size of both fish and nets.