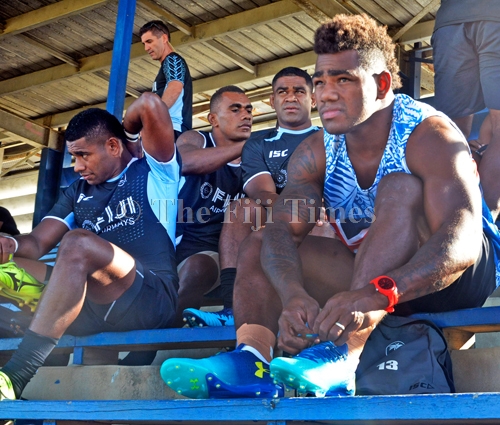 Josua Tuisova (right) with other members of the Fiji Airways Fiji 7s team before a training session in Nadi on Tuesday. Picture: REINAL CHAND

FIJI Airways Fiji 7s coach Gareth Baber plans to put everything into position to win the Rugby Sevens World Cup after a lapse of 13 years.

Fiji’s last win at the Rugby Sevens World Cup was in 2005 under the guidance of Kiwi coach Wayne Pivac.

Having narrowly lost the 2017-2018 HSBC World Rugby Sevens Series crown to South Africa after leading into the final tournament, Baber is well aware of the pressure on hand.

Baber said in Fiji there was an expectation to win every time.

“They players learn to live with it and it is hard when it does not happen,” he said.

“But when we win we do it for the right reasons. I think when the pressure comes it could be a motivator to take us to the right places. We will put everything we can possibly in position to win the world cup.”

The 16-member touring squad flew out to Utah on Tuesday and will train at high altitude for two weeks before the team is trimmed to the final 12. Warm-up matches have been lined up for the squad in Utah.

Baber said the matches would generate competition among the 16 players as they fought for a spot in the final squad.

“I’m excited, you just look down the list of players and they are world beaters in their own right,” he said.

“I’m excited about the prospect of getting them all training side by side. There are 16 players competing for the 12 spots.

“We are generating competition amongst the group. I will have an extended look at some of the other players who have come into our group recently. I’m excited about the prospect of what we can put in here going into the world cup.”

Bordeaux bound Semi Radradra who is on a three-week stand down period will join the squad in the United States this weekend. “Semi’s break comes to an end on Saturday this week,” Baber said.

“He will fly out on Friday and commence training on Saturday.

He had to have that break moving into Bordeaux where he has quite a lucrative deal.”

Fiji will face the winner of the qualifiers between Japan and Uruguay in the cup championship round of 16.

“I’m expecting them to come out and play as it is the final,” Baber said.

“They know where we have been this year and know what we are aiming to do. They have been a force in the series in the last two years.

“So we will take nobody for granted. We don’t have to wait to do that. Maybe at the end of the Sunday when we come up with the winning medal I may be talking differently. As it stands, it is a matter of taking each game as they come.”