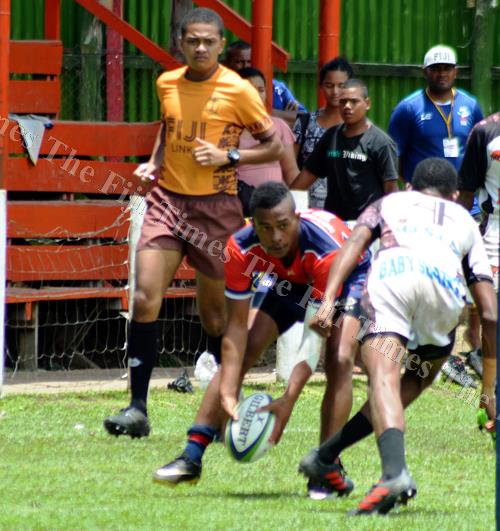 A Northern Spirits player scores against Somosomo yesterday. They won the match 19-0 in the under 19 category. Picture: LUKE RAWALAI

THE Fiji Airways Fiji 7s squad will begin camp next week to prepare for the Oceania 7s in Suva and Dubai 7s on November 1.

Coach Gareth Baber is in Labasa to scout new players in the ongoing CMFI 7s.

Baber said since the side returned from the World Cup 7s, players had been following their off-season training programs.

“The boys have been training in their own areas accessing gyms before I join them for workout on the field,” Baber said at Subrail Park yesterday. “We bring them into camp every now and then, but at the same time we are careful because they are always away from home.

“From personal experience so much can be done in players own localities, but we will be progressing into camp soon as we prepare for the new series.

“Our target this year is to win the HSBC 7s series qualifying for the Olympics and come out as number one seed.”

Baber said he was in attendance at the CMFI 7s this week to scout for talents.

“I am always scouting for players who can represent Fiji and it takes two to three tournaments to monitor the consistency of a player,” he said.-

“Then we need to speak to coaches and fellow team players of the reputation of any player before they can be included into the side. “It is always wonderful to witness local talents among our local teams and to see how far the game of rugby has developed in Fiji.”