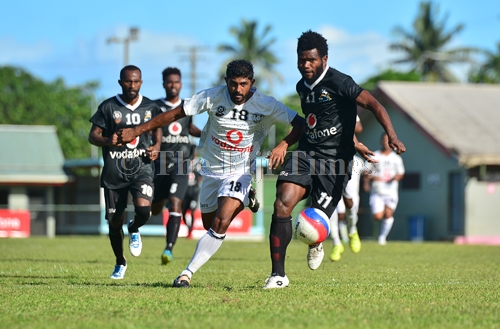 BA took full advantage of Kelvin Naidu’s absence in the second half to come from behind to hold Suva 2-all in their Vodafone Premier League match at Ratu Cakobau Park in Nausori yesterday. Naidu, who was the main man behind Suva’s attack was red-carded after he was involved in an off the ball incident with Ba defender Manasa Nawakula, who was also sent off the field.

Naidu assisted in the first goal when he sent a cross from a corner kick for Waisake Navunigasau to head the ball into the net in the 2nd minute and then in the 33rd minute he scored from a pile-driver from inside the penalty box.

Ba’s Abbu Zahid toiled hard to create opportunities and score goals with Saula Waqa and free kick specialist Avinesh Suwamy, but it was not until the 83rd minute when former national team midfielder Malakai Tiwa smacked the ball into the net.

He took the free kick from the edge of Suva’s penalty box, but the ball hit a Suva defender and came to him, without a second thought he took a powerful shot to the left of the goalmouth.

Ba utility Meli Codro in the 87th minute levelled the scores 2-all with a beautifully crafted goal from the left hand side of the field after Suva goalkeeper Simione Tamanisau failed to stop the ball.

“We did well and played how we wanted to play and had a lot of chances which we put away and it is football,” Suva coach Tuka Tisam said.

“Ba got two chances and they scored two goals, but we played well as per our performance. After Kelvin Naidu’s red card it was the turning point for us in terms of the team shape, but it is part of the game and we have to adapt to the situation and the game turned around.”

Ba manager Arvind Singh said his team lacked fitness, but they were happy to have come away with a draw.

“Suva was a fitter team than Ba and that is why Suva scored two goals in the first half, but I am not happy with the fitness level of the players. The coach (Ronil Kumar) told the players to play to the game plan in the second half and we managed to score two goals,” Singh said.

“It was a big blow for us after defender Manasa Nawakula was red-carded and it had affected the team. “We used youth players in the match and we will continue to get more young players.

We will definitely use more youth players in the Fiji FACT.”

Meanwhile, Rewa defeated Tavua 3-0 in the another VPL match at Garvey Park in Tavua.