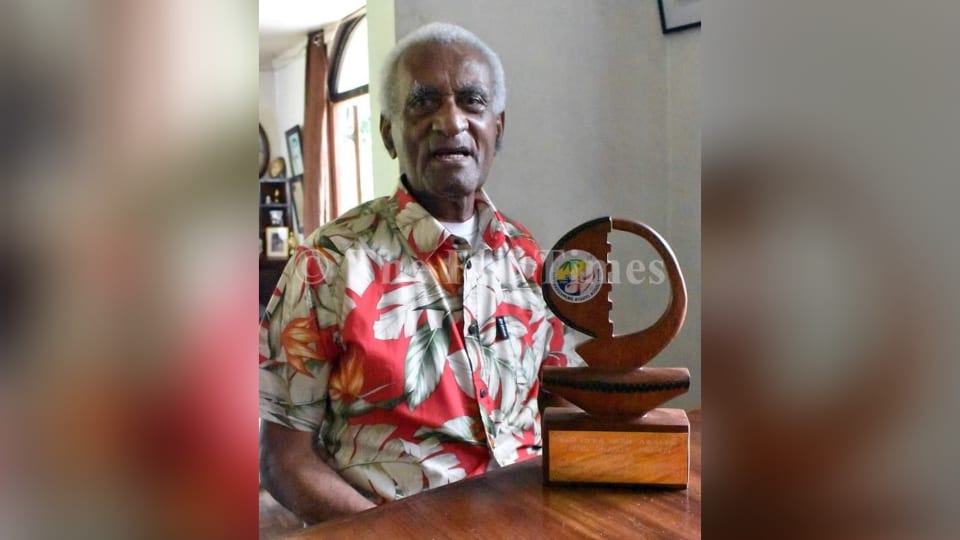 Manunivavalagi Korovulavula at his home with the Living Treasure Award he received on Saturday night. Picture: ATU RASEA

For Manunivavalagi Korovulavula, being awarded the Living Treasure Award at the 2022 Fiji Performing Rights Association (FPRA) music awards, came as a surprise for him.

The 88-year-old man told this newspaper that he did not expect to be given the award.

“It was a big surprise but a pleasant one,” he said.

“I look through the years, I’ve been involved and that’s how FPRA recognised me as I was the creator of the organisation.

“I never knew that they would consider my talent as a living treasure but that is what they wrote down and I have no hesitation to support it because I don’t know how to classify who I am and what I can do.”

Having composed countless songs, he advised those new to the music industry to create a melody which would smoothen and make it effective to the listeners.

“The singing that was held last night (Saturday) was not a song, it was like a chant.

“Music is music, it’s not shouting.

“The way I can express music is when you sing, first of all, the lyrics must be meaningful and there is only one target.

“Before when we sing, we like to sing the lyrics which are meaningful to them and the melody.” Meanwhile, the 2022

• Best English Song: I’ll think of you by Josa