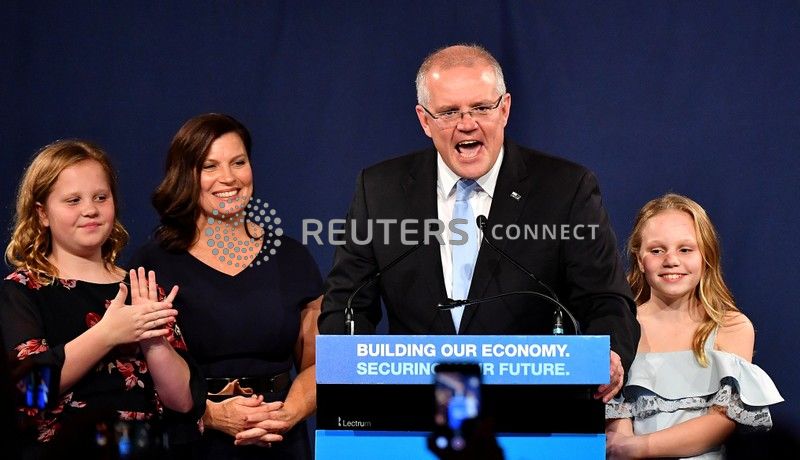 Morrison’s coalition defied forecasts to be re-elected on Saturday in what he called a political miracle.

The Australian Electoral Commission (AEC) on Monday said Morrison’s coalition has won 75 seats in Australia’s parliament, one seat short of a 76-seat majority.

The AEC said the coalition is ahead in two of the five seats that have not been declared.

The expected result sent Australian banking, property and health-related stocks to an 11-year high on Monday as investors cheered.

After a long and bitter election campaign, Morrison said Australians have had enough of politics.

“They’ve had their say, they’ve made their decision. Now they expect us to get on with it so they can get on with their lives,” Morrison told 2GB Radio in Sydney. “That’s what the quiet Australians have said and I’m going to honour that.”

One of Morrison’s first tasks after being sworn in will be a cabinet reshuffle after the retirement of several front-benchers. The personnel shift will be closely watched for signs of policy changes.

“The cabinet reshuffle will indicate whether he plans to move on polices such as climate change,” said Rodney Tiffen, Emeritus Professor of Political Science, University of Sydney.

“A big signal will be whether he moves the ministers for environment and energy. If he replaces them with people who have argued for stronger action, it will be marker.”

Morrison has rejected efforts to increase the use of renewables to generate electricity, arguing it would damage the economy which relies on coal-fired power and mining exports.

The coalition has stuck to an official target to cut carbon emissions by 26-28% from 2005 levels by 2030, but the United Nations has warned Australia was unlikely to meet this goal.

The re-elected Liberal-led coalition has no renewable energy target beyond 2020.