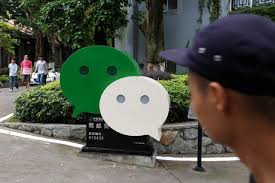 FILE PHOTO: A WeChat logo is displayed inside TIT Creativity Industry Zone where Tencent office is located in Guangzhou, China May 9, 2017. REUTERS/Bobby Yip

Polls predict a narrow win for the center-left opposition Labor party at a time of tense relations with Australia’s biggest export partner, frayed by concerns over China’s influence in domestic politics.

Although the WeChat platform figured only sparingly in the last election, it is a major campaign tool this time, as politicians employ Chinese speakers to run channels in areas where large numbers of voters speak Mandarin and Cantonese.

Andrews’ campaign has posted a handful of messages, including a lunar new year greeting in Chinese.

“I think he will win,” said Chris Chen, a WeChat moderator from Andrews’s city of Melbourne who counts the lower house member of three decades among his 300 chatgroup members.

“There are many Liberal supporters in my chatgroup and they are not fussed if the candidate is Chinese or not,” Chen added, referring to the center-right Liberal party.

A spokeswoman for Andrews did not respond to requests for comment.

People of Chinese ancestry account for 15.5% of Andrews’ constituency of Menzies in the southeastern state of Victoria, census data shows, above the national average.

The Labor candidate vying for Andrews’s seat is Stella Yee, who speaks some Mandarin and Cantonese. She said her language skills did not hurt her election prospects, as it was important to engage with the Chinese community.

“Even though we are getting to be quite a sizeable chunk of the population, we are not represented in the same numbers in parliament,” she told Reuters.

Politicians now see WeChat as a way to win votes and demonstrate a commitment to multiculturalism, said Haiqing Yu, a researcher in Chinese social media at RMIT University.

“If the Australian major parties and politicians don’t engage…on the major social media platform that most Chinese migrants use, they lose a really valuable opportunity,” she added.

Andrews, who first fought the conservative seat of Menzies in 1991 and has a healthy margin, has suffered backlash recently over his support for the coal industry in an election where climate change policies loom large.

Colour Code, an arm of activist group GetUp! focused on promoting multiculturalism, said it had been campaigning against Andrews on WeChat.

“Kevin Andrews is up for an incredible shock this election,” its director, Shen Narayanasam, said in an email.