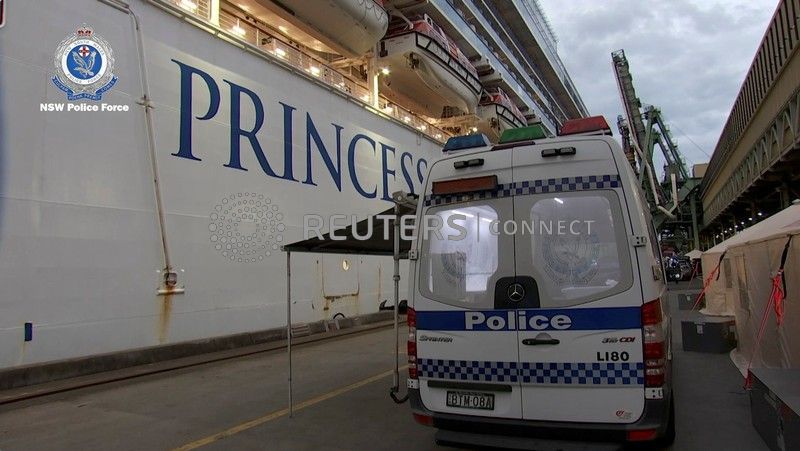 SYDNEY (Reuters) – Australian police said on Thursday they have taken the “black box” of a cruise ship which disembarked hundreds of passengers infected with the coronavirus in Sydney, as part of a homicide investigation into the country’s deadliest infection source.

The investigation got underway as the Australian authorities said the rate of new coronavirus infections hit its lowest number in three weeks and began arranging more flights to bring home citizens stranded abroad.

The Ruby Princess cruise ship, owned by Carnival Corp, has become a flashpoint of public anger in Australia after authorities granted the ship permission to disembark its 2,700 passengers last month without health checks.

Hundreds of the passengers later tested positive for the coronavirus and 15 have died, out of Australia’s roughly 6,000 confirmed cases and 51 deaths.

“They spoke to the captain of the ship, who was extremely helpful,” Fuller said in a televised news conference on Thursday.

“Ships have a black box very similar to that of international planes, and that and other evidence has been seized for further investigation.”

About 1,000 crew of various nationalities remain on board the ship.

Globally, more than 1.5 million people have tested positive to the coronavirus, which has caused about 87,000 deaths.

“The curve continues to flatten, we are consolidating the gains,” Hunt said in a televised news conference.

“While we have been cautious over the last two weeks as we have seen the early data, what we’re seeing now is a genuine consolidation.”

Prime Minister Scott Morrison in his Easter address implored people to stay home and cancel trips during what is a traditional vacation period.

Morrison earlier met with state and territory leaders in one of the bi-weekly meetings of a special Cabinet set up to deal with the coronavirus outbreak. The Cabinet will not meet now until Thursday, Morrison said.

Australia has for weeks restricted the movements of people, requiring them to stay home except for essential work or to exercise and buy food, and police have said they will use the threat of on-the-spot fines to stop people travelling or socialising over Easter.

Police said they will step up their presence and use helicopters to target anyone who attempts to travel.

The flights would carry people in Peru, Argentina and South Africa home in the next week, with flights also being planned from India and the Philippines.

While Australia has slowed the growth in new coronavirus cases, it remains anxious about the economic toll of the virus.

Desperate to avoid a prolonged economic contraction, Australia’s parliament on Wednesday approved spending $130 billion ($81 billion) over the next six months to subsidise the wages of about 6 million people, or a quarter of the population.

Australia’s central bank on Thursday said the country’s banks are well placed to weather the coronavirus-driven economic downturn and any potential run to withdraw cash by some locals.

“Some customers with large balances sought to hold precautionary funds. This included a small number of customers asking very large withdrawals, more than $100,000, and in some cases into the millions of dollars,” the Reserve Bank of Australia said.