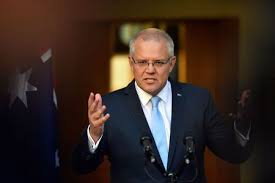 SYDNEY (Reuters) – Australian Prime Minister Scott Morrison, trailing in opinion polls ahead of a May 18 election, on Sunday campaigned on the hot-button issue of immigration, promising to cut annual migrant numbers and freeze the country’s refugee intake.

The pace of migration and the over crowding of Australia’s major cities is a sensitive issue amongst voters in a nation where 29 per cent of the 25.3 million people were born overseas and where migration levels now outstrip the birthrate.

“Managing our population growth is very important to the quality of life that we have in our cities,” Morrison said from a Liberal party rally in Sydney on Sunday.

The Australian Bureau of Statistics says net overseas migration in the year to September 2018 was 240,100.

The prime minister said if his government was re-elected it would cap annual migrant numbers at 160,000 people per year for the next four years.

The restriction does not include more than 350,000 foreign students granted visas each year, the majority of whom end up staying and who pump millions of dollars through the nation’s universities, according to Department of Home Affairs figures.

Voters in the largest cities of Sydney and Melbourne where most migrants settle have growing concerns over congestion, inadequate infrastructure and the rising cost of living.

Morrison also said the annual refugee intake would be frozen at 18,750 people. The Labor opposition intends to increase the refugee intake to 27,000 by 2025.

Labor’s campaign has focused on increased spending for education, health and welfare and on Sunday its leader, Bill Shorten, promised A$4 billion ($2.82 billion) worth of childcare to a million low-income families, including 15 hours a week of free pre-school, if elected.

“It’s time that we rewarded mums for participating in the economy instead of penalizing families,” he said from a rally in Melbourne. He also promised free dental care for the aged.

Morrison’s government entered the campaign well behind Labor in opinion polls but has closed the gap with the latest poll showing his Liberal-National party coalition up two points on the primary vote to be level with Labor at 37 percent.

But the poll, conducted by YouGov/Galaxy for News Corp media and published on Saturday, showed the coalition still trailed Labor 48-52 on a more important two-party preferred basis.