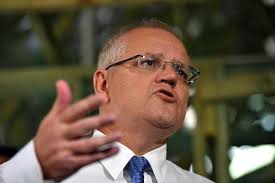 The principles will require overseas infrastructure spending by G20 nations to be linked to job creation and economic returns; they must take into account the full costs to the borrower; and must ensure environmental compliance and disaster resilience.

It is understood Australia backs the principles, which were negotiated this month by G20 finance ministers, who said the principles would build pressure for better-quality investment and economic growth in the Indo-Pacific.

Before departing for the summit in Osaka, the Prime Minister welcomed Chinese infrastructure investments in the region under President Xi Jinping’s Belt and Road Initiative, but said projects should not adversely affect borrowing nations.

“We support investments with commercial merit that meet genuine market need and international standards, including on transparency and debt sustainability,” Morrison said on Wednesday.

China, which has been accused of foisting unsustainable BRI loans on to poor nations, was initiall­y cautious about the principles. But Beijing will reportedly back them, in line with Xi’s statement in April that BRI projects be green and sustainable.

Japan has been spearheading efforts to counter growing Chinese influence in the Indo-Pacific, saying developing nations should not be saddled with massive debts for new roads, railways and ports.

Sri Lanka has been forced to hand over its port of Hambantota to China on a 99-year lease after failing to meet loan repayments.

The dangers of poor-quality infrastructure were shown recently in Papua New Guinea, when a $136 million (US$95.2 million) Huawei internet cable connecting 14 PNG provinces broke in four places in an earthquake. Australia had offered to fund the cable, but PNG wanted it delivered by the telco through a loan from China’s Exim Bank.

Liberal senator Concetta Fierravanti-Wells, who has accused­ China of building “useless buildings” and “roads to nowhere” in the Pacific, said projects needed to be fit for purpose.

“It is all very well to have these principles; the test will be whether they are adhered to,” she said. She said the G20 should support a proposed Pacific Islands Forum fund to weather-proof community infrastructure including schools, community halls and hospitals.