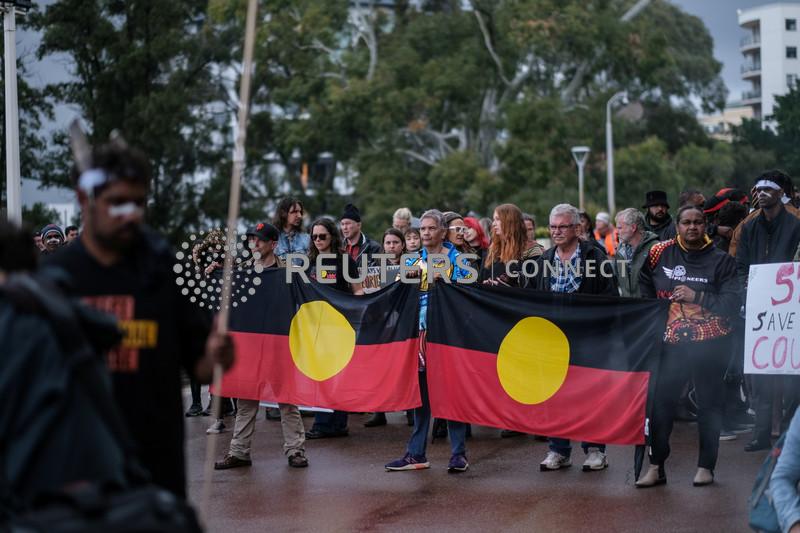 FILE PHOTO: Aboriginal groups' members carry Australian Aboriginal flags while taking part in a march against what they say is a lack of detail and consultation on new heritage protection laws, after the Rio Tinto mining group destroyed ancient rock shelters for an iron ore mine last year, in Perth, Australia August 19, 2021. Courtesy Gabrielle Timmins/Kimberley Land Council/Handout via REUTERS

MELBOURNE (Reuters) -Australia should set out a new national legal framework to protect Aboriginal cultural heritage, an inquiry into the destruction of ancient rock shelters for an iron ore mine found in its final report on Monday.

The report said Aboriginal traditional owners should be the top decision makers on development applications that could impact their heritage and have the power to withhold consent and to take civil action to enforce proposed new laws.

The recommendations followed a 16-month parliamentary inquiry into how Rio Tinto Ltd last year legally destroyed the sites at Juukan Gorge, Western Australia, that showed evidence of human habitation over 46,000 years, from the last Ice Age.

Widespread anger at the destruction of the caves put a focus on industry practices and cost the jobs of Rio’s then-chief executive and two other senior leaders and led Chairman Simon Thompson to flag he would step down in 2022.

The committee, which recommended in December that Rio should pay restitution to the traditional owners, on Monday set out recommendations for reform of a patchwork of state and federal laws with differing definitions and processes, all of which it found contained “serious deficiencies”.

“It became apparent to the Committee that legislation designed to protect cultural heritage has, in many cases, directly contributed to damage and destruction,” the report said.

Rio Tinto said in a statement it welcomed the findings.

“We are focused on improving our engagement with Indigenous Peoples and our host communities to better understand their priorities and concerns, minimise our impacts, and responsibly manage Indigenous cultural heritage,” the company said.

Rio said it has reviewed over 2,200 heritage sites within its existing mine plans and has boosted staff overseeing heritage practices by 20% on last year to 300 people.

The committee’s recommendations are likely to sit well with Aboriginal groups which have been calling for more decision making control around their heritage, as well as for national standards.

The Traditional Owners of the destroyed caves, the Puutu Kunti Kurrama and Pinakura (PKKP) people said in a statement the sense of sorrow and loss remained.

“The response by Rio Tinto, other mining companies and government decision makers to the events at Juukan Gorge will be a test case for First Nations people throughout Australia and internationally,” the PKKP said, adding that they were working with Rio to improve the relationship.

The report recommended the Australian government legislate a new framework for cultural heritage protection at the national level in agreement with Aboriginal and Torres Strait Islander people.

The new legislation should set out minimum standards for state protections and traditional owners must have primary decision-making power in relation to their cultural heritage in development processes.

The legislation must include adequate compliance and enforcement mechanisms as well as penalties, the report said.

“Traditional owners should be able to effectively enforce Commonwealth protections through civil action,” it recommended.

The report comes as Western Australia is set to announce an overhaul of its heritage protection laws which Aboriginal groups have criticised because final development decisions remain with the state government.

Other recommendations included for industry and government to fund Aboriginal development review bodies in return for greater transparency from these groups.

The Federal government has six months to table its response to the report.