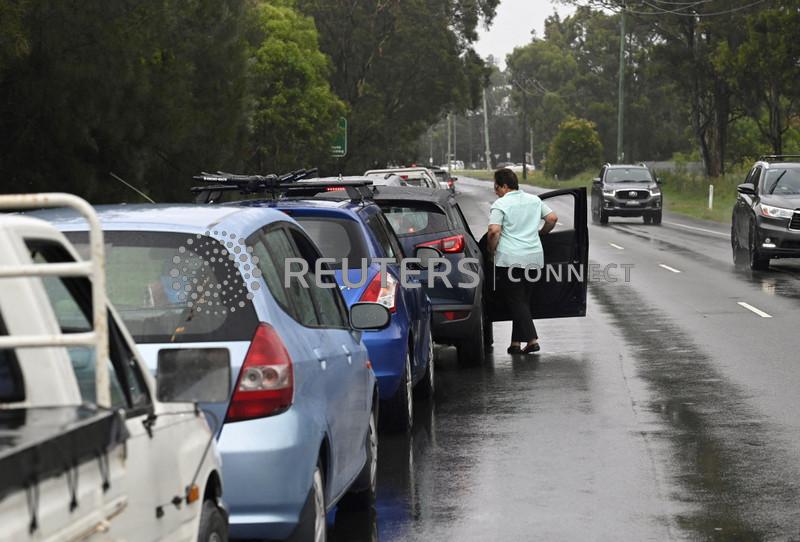 A woman in line at a coronavirus (COVID-19) testing centre steps out of her vehicle to look at the queue of traffic blocking a Western Sydney highway in Sydney, Australia, January 5, 2022. REUTERS/Jaimi Joy

SYDNEY (Reuters) – Australia must “push through” the fast-moving Omicron outbreak, Prime Minister Scott Morrison said on Monday, as infections surpassed 1 million, more than half in the past week alone, throwing a strain on hospitals and supply chains.

Although aggressive lockdowns and tough border controls kept a lid on infections earlier in the pandemic, Australia is now battling record infections in its effort to live with the virus after higher vaccination rates.

Growing hospital admissions have forced officials to restore curbs in some states, as businesses grapple with shortages of staff because of sickness or isolation requirements.

Morrison, facing pressure at the start of an election year, plans changes to isolation rules to allow work in food production and distribution by those who have been in close contact with asymptomatic infections.

“Omicron is a gear change and we have to push through,” the prime minister told a media briefing in the capital, Canberra. “You’ve got two choices here: you can push through or you can lock down. We are for pushing through.”

Morrison, who will submit his proposals to state leaders at a meeting of the national cabinet this week, plans to eventually widen the changes to transport and other key sectors.

Even though Australia was dealing with serious volumes of cases, health systems were coping, Morrison added. More than 3,500 people are in hospital, up from about 2,000 a week ago.

Data from a Reuters tally showed Australia’s infections crossed 1 million on Monday, with more than half in the last week alone.

Supply issues could persist for another three weeks, said supermarket chain Woolworths, where one in five employees is in quarantine.

“At this stage, there is enough product in our supply chain to meet the needs of customers,” Chief Executive Brad Banducci told ABC Radio. “It might not always be their favourite brand, unfortunately.”

Australia’s strict border rules are again in the public eye after it cancelled an entry visa for star tennis player Novak Djokovic because of questions about his vaccine exemption.

The judge hearing Djokovic’s legal challenge to the decision to revoke his visa aired concerns about the Serbian’s treatment by border officials on his arrival.

Health officials warned Monday’s figure of just over 67,000 infections could be an “underestimate”, as reports from some states do not include those who tested positive in at-home rapid antigen tests. Sunday’s tally was just under 100,000.

The death toll stands at 2,387, though the Omicron wave has caused fewer deaths than previous outbreaks, with 92% of those over 16 having received two vaccine doses.

As its booster programme gathers pace, Australia began rolling out from Monday inoculations with Pfizer’s vaccines for children aged five to 11.