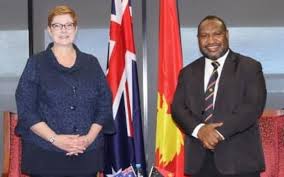 The commitment was made during a meeting between Payne and PNG prime minister James Marape Thursday in Port Moresby.

Marape says there will not be many changes in terms of PNG’s bilateral relations with Australia but he says he will be looking at areas to consolidate and strengthening the existing relationship.

The prime minster says he also acknowledged Australia’s contribution to the Pacific Institute of Leadership and Governance and explained his government’s desire to reform the PNG public sector by conducting regular training programs for public servants.

Payne assured Marape of her support to broaden bilateral relations as well as encouraging more business engagements with PNG.