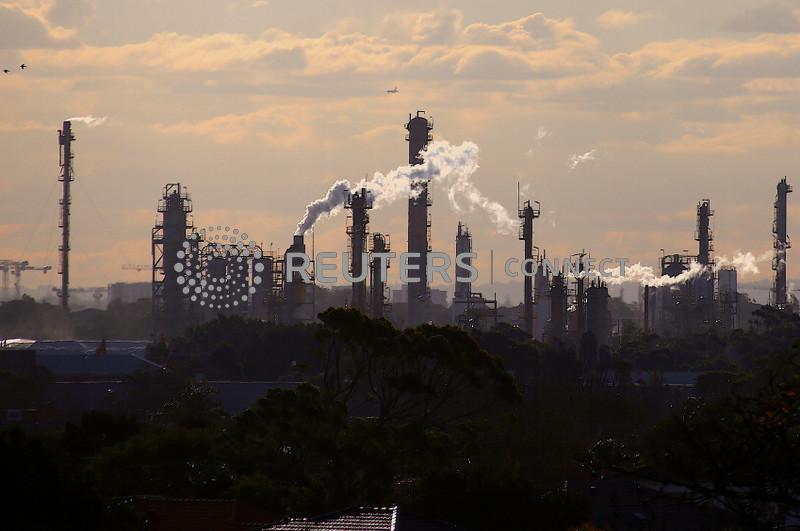 FILE PHOTO: Birds and a plane are seen flying above emission from the chimneys of a chemical plant located near Port Botany in Sydney, Australia June 2, 2017. REUTERS/David Gray

MELBOURNE (Reuters) – Australia, under a new Labor government, on Thursday raised its 2030 target for cutting carbon emissions, bringing the country more in line with other developed economies’ Paris climate accord commitments.

Australia, one of the world’s highest per capita carbon emitters, pledged to the United Nations that it would cut carbon emissions by 43% from 2005 levels by 2030, up from the previous conservative government’s target of between 26% and 28%.

“When I’ve spoken with international leaders in the last few weeks, they have all welcomed Australia’s changed position,” Prime Minister Anthony Albanese said after notifying the U.N.

Under the former government, Australia, the world’s top exporter of coal and liquefied natural gas, had long been seen as a laggard in climate commitments, with no clear energy and climate policy to encourage renewable energy investments.

At the UN climate summit in Glasgow last year, former prime minister Scott Morrison was criticised for failing to set a more ambitious emissions-cutting target while the United States, Canada, EU, Britain and Japan all sharply stepped up their pledges.

“For years, the Australian government told the world that was all too hard,” Climate Change and Energy Minister Chris Bowen told reporters at a televised media conference in Canberra.

The push to slash emissions more rapidly comes as the country is facing a major power crisis caused by planned and unplanned coal-fired generator outages, which have driven up demand for gas-fired generation just as global gas prices have skyrocketed.

Bowen said the crisis highlighted the need to speed up, not slow down, work on the regulations needed to encourage more investment in renewable energy.