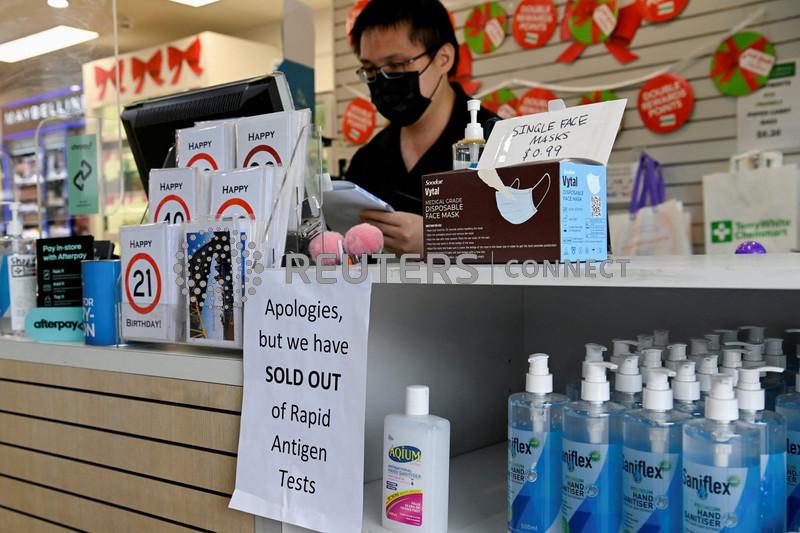 FILE PHOTO: A pharmacy displays a sign to inform customers that Rapid Antigen Test kits are sold out in wake of the coronavirus disease (COVID-19) in Sydney, Australia, January 5, 2022. REUTERS/Jaimi Joy

SYDNEY (Reuters) -Australian Prime Minister Scott Morrison said on Monday the shortages of at-home antigen tests were “not unique” to the country as authorities deal with a runaway Omicron outbreak that has driven up hospitalisation rates and strains testing systems.

Australia is facing a shortage of at-home rapid antigen test kits after asymptomatic close contacts were told to bypass government-funded testing hubs, where high volumes delayed results by several days, and take their own tests.

“The rapid antigen tests are in short supply all around the world. This is not something that is unique to Australia going through it,” Morrison told radio station 2GB on Monday. “It’s part of dealing with Omicron. Omicron has disrupted everything.”

ACCC Chair Rod Sims said there were reports of kits costing even up to A$500 ($361) at online retailers, and A$70 per test at stores when they were available for around A$10 at pharmacies weeks ago.

Morrison, under pressure in an election year for his handling of the Omicron outbreak and not procuring enough supplies of antigen tests, early this month had agreed to provide 10 free kits for low-income earners.

Doctors and trade unions are demanding free tests for everyone, but Morrison has resisted those calls saying the government would not cover the cost, citing a heightened role for “personal responsibility”.

Australian Council of Trade Unions Secretary Sally McManus said dozens of unions will meet later on Monday to respond “to the failure of the Federal Government to keep us safe”. A survey by the Australian Institute on Monday showed almost three-quarter of Australians believe they should get free antigen tests.

In a bid to ease pressure on its testing hubs, Victoria from Monday began rolling out 3 million antigen tests to frontline workers and the vulnerable population, while many other states awaited millions of testing kits to be delivered.

After successfully containing the virus earlier in the pandemic, Australia has reported nearly 1.3 million cases over the last two weeks, overwhelming hospitals and testing clinics.

Daily infections on Monday dipped in New South Wales and Victoria, Australia’s most populous states, amid expectations the Omicron wave had neared its peak https://www.reuters.com/world/asia-pacific/australia-nears-omicron-peak-daily-infections-hover-around-records-2022-01-15 in the country. But net new hospitalisations remain elevated, with more people admitted than at any other time in the pandemic.

Nearly 74,000 cases were reported on Monday, the country’s lowest tally in a week. National daily numbers had touched a record 150,000 last Thursday but have been steadily falling since then.

So far, Australia has reported around 1.6 million infections and 2,699 deaths since the pandemic began.